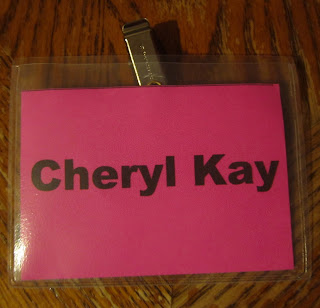 When we got to the hotel, I was totally overwhelmed. I must have looked like a total tourist craning my neck to look at the tall buildings. Even as we pulled up to the door, I had doubts that we were at the right hotel. The bell boys, in their bright red uniforms, looked like something out of a movie. Our luggage was tagged and taken to a little room to await our room being ready. Our roommate, Lisa, hadn't arrived yet. I was looking for a familiar face but didn't see anyone from our party. Sherri went to park her car and asked me to stay in the lobby. I was still looking around, looking every inch the first timer. Finally, Sherri returned. There was nothing to do but try to find someone from our party. I still thought there was a chance we were in the wrong hotel. But then, I spotted someone I recognized. The black hat could only belong to one person: Richard Windsor. And it was him. I pointed him out to Sherri, who seemed equally relieved at seeing someone from our party. We went over to him and introduced ourselves. He looked just like his pictures. Except I thought he'd be taller. He asked about our trip and graciously invited us to go with him to the pool to attend a little meet and greet he was hosting. When we got to the floor where the pool was, we had to sign a paper to get in. This didn't seem unreasonable as we were not yet registered guests. Since the room was in Lisa's name, we had to wait for her to arrive. When we got to the pool, I couldn't believe how warm it was in there. I was wearing a long sleeved shirt and had no chance to change my shirt since the luggage was stored away. There were a lot of people I recognized and a few I was meeting for the first time. During a break outside to cool off, I got my first glimpse of the ocean. I was awed by it and I couldn't wait to snap some pictures. 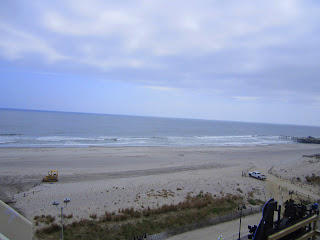 Because of the damage caused by Hurricane (or Super Storm if you prefer) Sandy, there was a lot of construction going on. Several of the construction workers proved to be just as lovely scenery as the ocean. Sherri stayed in contact via text with Lisa, who like us, was driving in. We got a bit bored (not to mention warm) so we headed back to the lobby. We saw Charles there, a switch who I've known for ten years. Right after that, Lisa showed up. We went up to the desk to get registered. Just as we suspected, our room wasn't ready yet. Charles invited us to come up to his room and wait, as the man at the desk told Lisa he would text her when it was ready. Somehow, while visiting in Charles' room, Charles and I ended up spanking Lisa with our sandals. Going up to Charles' room I had my first confrontation with the elevator. Charles' room was on the 42nd floor of the hotel. The elevators felt really fast to me. It felt like being shot from a cannon. Somehow, the elevators went from the 2nd floor to the 33rd. As fast as the elevators were, I came to the conclusion that they weren't going to be that much of a problem. That was a pleasant surprise. We had been told that our room would be ready by four o'clock so we felt we had some time to waste. When we got to Charles' room, we couldn't believe the size of the bathroom. Lisa put it well when she said "The bathroom is bigger than my first apartment!" There was actually a vanity where you could sit and put on make up or style your hair properly. By the time we got done messing around in Charles' room, it was five o'clock. Lisa got a bit frustrated and called the desk to see if our room was ready. She was told it was. So much for the text telling us. Lisa and Sherri went to get the room keys and pick up our luggage. Sherri said she would call Charles' room and let me know what room we were in. It turned out to be one floor above Charles'. He very nicely went in the elevator with me. I don't think I will ever be able to go in one alone. It's just too scary to think about. When I got to our room, Sherri told me that two bell boys had brought the luggage (which included my toy bag) up and they had expected to be tipped and tipped well. This was my first indication that things in Atlantic City aren't like things back home. Everything is expensive and nothing is free. I understand that a person has to make a living. But the trip was already proving to be more expensive than I thought it would be. We began the task of getting our clothes put away. I called dibs on the bed by the window so Sherri and I would be sharing that one. It was time to get our party clothes on. I knew I hadn't packed enough clothes, especially pants. I had not known what to pack because I was unsure of the weather. I guess it didn't really matter what I wore. It was going to be jeans and a top. Lisa and I needed time to put on make up and do something with our hair. Pretty soon, it was time to go downstairs to the Pro Bar and get registered. As soon as we got downstairs, I heard someone call my name. It was Nancy, someone I had wanted to meet for a long time. She's a 64-year-old grandmother, but I never believed it. She was way too gorgeous and sexy to be a grandma. She introduced us to her husband, Tom who I had also noticed was on Fetlife. When I got in line to get registered, I realized that they were asking for ID. I had left my purse up in the room, opting to carry my camera in my jeans pocket. One of the other party goers was kind enough to snap a group shot of us: 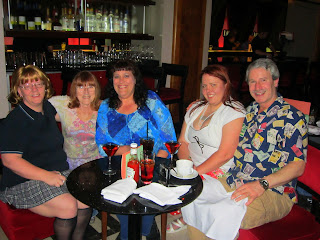 I loved Tom's shirt. It has baseball cards on it. I look like I'm crushing Nancy, poor thing. Those red drinks are actually spanko drinks that the waitress had made for us. She at first asked if we were the "smacko" group and she was quickly corrected. Once we got registered, Tom graciously ordered some appetizers for us. I was famished, to be honest. The first big surprise of the party came when Nancy introduced me to one of my spanking video idols, Ralph Marvel. 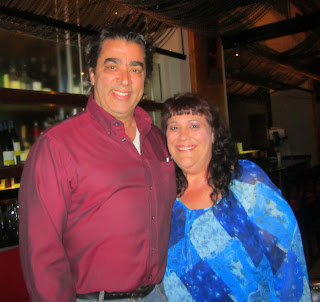 I was thrilled again when he consented to stand for a photo with me. I had been watching him in Shadow Lane videos for almost 20 years and I was so thrilled to meet him. I wish I had looked better in the photo, but I look like a starstruck groupie. I was just so thrilled to meet this guy. The next night, he would give me a second thrill by giving a very nice public caning. While meeting all of these people was awesome, I was itching to play. I had come a long way to party. The party hadn't officially begun yet but enough people had arrived that there were enough chances to play. So Tom settled the tab and we headed off to his and Nancy's room to play. Nancy isn't a hard player, but she gets the most out of her sessions. She's adorable, hot and sexy all rolled into one. I hope that, when I'm her age I'm even still playing much less looking as good as she does. Tom lost no time getting each of us over his knee and giving us our first party spankings. Well, Lisa got hers in Charles' room. He spanked me a little, but it wasn't what I would call a real session. 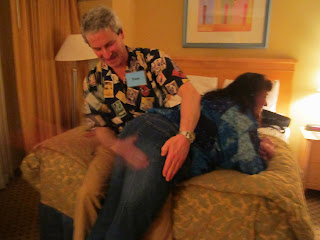 Tom said he was absolutely thrilled to meet the "famous" Cheryl Kay and to spank my equally famous bottom. I pooh poohed this notion. I am NOT famous. Granted, I'm all over Fetlife but I'm far from famous. He spanked me with his hand and a nice assortment of toys. It was so special for me to have my scene sisters with me in Atlantic City. I just can't say with words what it meant to me.

Tomorrow, I meet the "famous" cane of the famous Richard Windsor.