In Memory of Cigi 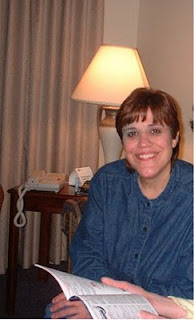 This is the saddest posting I will ever make. My beautiful twin sister, Carol, known to most of you as Cigi, passed away on Friday. She fought a long, brave battle with cancer, which she documented in her blog. She was 49 years old.

Goodbye, friend, until we see each other again.

Your loving sister,
Cheryl
Posted by Cheryl at 10:32 PM 5 comments:

I'm not exactly sure why, but most of the women I know in the spanking scene (the ones who are bottoms anyway) are obsessed with panties: with shopping for them, wearing them and of course, getting spanked in them.
Before I got active in the spanking scene, my attitude toward underwear was one of viewing them as a practical necessity. I wore mostly cotton because I wanted to be comfortable. Cigi found some really comfortable (but hideous) cotton panties called Love Pats that we wore for the longest time. Or we would just go to Wal-Mart and buy the six packs of Hanes For Her or Fruit Of The Loom. Who cares what they looked like? Who else besides me was going to see them? I still value comfort more than almost anything. That hasn't changed since I got into the spanking scene.

What HAS changed is the fact that I now look for cute and pretty panties to wear to parties or on play dates. I still wear the plain ones to work though. And this is just really to keep my nice panties in good shape.


I really think a lady can't have too many cute or sexy pairs of panties. It's sort of hard to gauge what kind any certain top you play with will like so it's best to have a large assortment. 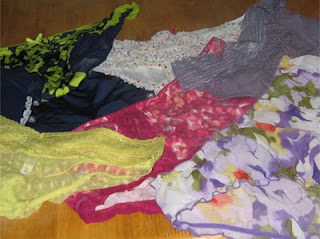 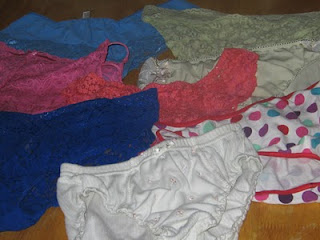 These photos in no way show all the panties I have. They're merely a representation of what I have in my collection. I've spoken on this topic at length with a lot of tops I know and almost without exception they tell me that spanking a woman over nice panties (and eventually taking them down) is one of the great joys of spanking. Many tops have told me that they compare taking down a pair of beautiful panties to unwrapping a Christmas present. Of course, I know a few who just don't care for panties. They prefer to get right down to business without even taking a minute to admire your choice of panties. This is OK, too. To each his own. But it disappoints those of us who like to savor the moment and wait anxiously for the moment when the guy gets that first glimpse of the panties we've so painstakingly chosen. Some guys like cute cotton panties with floral prints; the kind that remind them of little girl panties. Some like the kind with something funny or bratty printed on them. Some prefer a specific kind of cut (like boylegs, cheekies or bikinis). And some go wild over those sheer, lacy ultra feminine panties, which were called "dainties" in my mother's day. I have some of just about every type of pantie there is, but I admit I only look good in a limited number of types. Whatever kind a guy likes, it's almost universally understood that "granny panties" aren't among spanko guys' favorite. Some like that old-fashioned cut but most hate them with a passion. There also seems to be a love/hate dynamic when it comes to thongs. Guys either love them or hate them. I have yet to find someone who doesn't have a passionate opinion of them one way or another. I actually like them. I wore them a lot in my newbie days because I was very modest and didn't want my girlie bits showing with strangers. Even after all this time in the spanking scene, I'm still modest. I don't wear thongs much though unless a guy professes a liking for them. I find them pretty comfortable but sometimes have trouble finding nice ones in my size.

I know this is a topic that almost everyone has covered on their blog; heck, I've even covered it before. But I think it's one of those topics that we love to revisit. Like it or not, panties are as much a part of the scene as implements and arnica. I just can't imagine a bottom getting ready for a play date or to go to a party and not giving any thought to what kind of panties they're going to wear. I bet even male bottoms think about it. I think it's just something that adds to the anticipation of a scene. And also adds to a girls' pantie drawer.

With some free time on my hands today, I started browsing other blogs here and found a phenomenon I thought was a bit surprising. Many of the people who blog about spanking are young (under 30) female bottoms or subs, some of which work as models for the plethora of spanking oriented websites and video companies. They grew up in a time when women were far less repressed than in my time. Many of them have the attitude that sex and spanking are the same thing; interchangeable. As I continued to browse, I realized a lot of the men think the same thing. So, for what it's worth, here's the opinion of an older woman:

First of all, let me say right here that there's nothing wrong with sex. I've had lots of it over the years. I'm currently going through The Change (that nice phrase we oldsters use when referring to menopause) so that affects my libido, though not much. I'm not a frigid old woman. I still enjoy attention from men and pride myself on still being attractive to a certain type of man. Most young men wouldn't find me attractive. I don't have tattoos nor do I have multiple piercings (unless you count my ears; each are pierced three times). My hair isn't dyed dark blue or purple. I'm not goth so black lipstick isn't in my make up bag. I'm just your ordinary, garden variety, run-of-the-mill 49 year old woman. Except that I'm better preserved.

To me, sex and spanking are two totally separate things. Yes, I would concede that spanking is part of my sexual make up. However, I'm a totally straight woman and I get spanked by both sexes. For me, it's the physicality of the act that does it for me. I like the pain of spanking. I like knowing that I can take a hard one. And yes, I admit I like knowing that my male spankers think I have a nice bottom. But sex? With all the men I play with? No way. I reserve sex for the man I'm in a relationship with. I have taken heat on Fetlife for holding this opinion. Everyone else says "Get over it!" and "Just do it!" But I can't. It might be OK for women and men who were raised that sex is OK no matter what to indulge in sex for sex's sake--it feels good so do it. But not me. I have way more respect for my body than that. To me, passing myself around like a butter dish would leave me feeling empty inside. I remember one night stands I had in my late teens and 20's that I still hate myself for. By the time I hit my mid-20's, AIDS had become a real concern in the hetero population and me add most of my girlfriends held the opinion that no man was worth dying over. So we became, for better or worse, much more selective. At the time, it wasn't even known for certain how the virus was spread (that's when sneeze guards started to show up on salad bars and smorgasbords). Better to be safe than sorry. So, like it or not, most women in my age bracket are careful who they have sex with. When I became active in the spanking scene, I pondered what I would do with any sexual energy that might build up during a scene. Before I ever played with anyone or talked to anyone about this, I knew this was going to be something to be dealt with. I've been called a "prude" and "frigid" by others because I don't allow my loins to rule the rest of my body. I have also been advised to get with the program and realize that this is the 21st century, where we do whatever we feel like and damn the consequences. Back when I was younger, people who had control over their passions were respected for it. Today, let a young person say 'I'm saving myself for marriage' and that young person will be ridiculed all over Facebook and Twitter. "So and so is saving herself!! Ha! Ha!" I admire a person who makes that kind of personal decision and then doesn't allow peer pressure or ridicule to sway them. Young people will say 'I have the right to have sex with whoever I want!' Yes, you certainly do. But you also have the right to live with the consequences of acting foolishly or in haste.

So, for me, spanking remains totally separate from sex. I engage in erotic play from time to time with men I trust. But actual sex? Not gonna happen. Not with men who are just friends. I've done that a time or two as well with men I was playing with. I felt really bad afterwards. So I guess you could say that I have arrived at my present situation having seen how the "other half" do it. And I would have to say no thanks. I'm not knocking people who feel that sex is an integral part of the spanking experience for them. Or that spanking is merely foreplay. I've met a lot of people like that, too. Most of them are in a committed relationship with each other.

I know that my attitude probably puts me in the minority as far as younger players in the spanking scene are concerned. But I would be willing to bet that for women in my age group, I'm probably the norm. Whether I'm right or not, this is just an older woman's opinion.
Posted by Cheryl at 10:52 AM 3 comments: