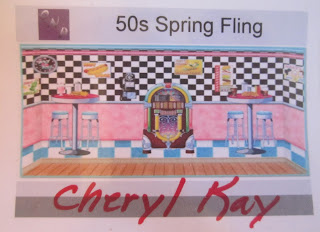 The Our Need And Desire 50's Spring Fling spanking party is just a memory now. But what memories it created. Due to several circumstances, not the least of which was lack of funds, I hadn't been able to attend an OND party for a year and a half. It had been November, 2010 the last time I saw Valorie (the lovely lady who runs the group) and at that time, she was in poor health and unable to enjoy herself fully. That wasn't so this time. In fact, it was easy, when you saw her, to forget the physical challenges she had faced in the past year or so. 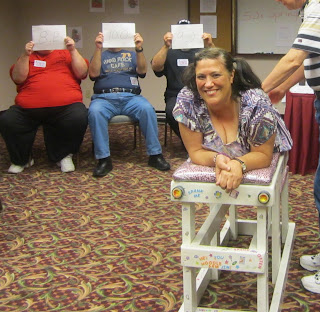 For some reason, I felt like the belle of the ball. All of the men wanted to spank me. The top spanking me here is a guy I haven't played with in more than five years. I later heard it said that almost all of us who attended could be considered "misfits" and that's why we all headed to Valorie's party, because she welcomes people who have a hard time fitting in at other parties. I guess the real test will come later this summer at Crimson Moon. I was really hoping this photo would make it into Kinky And Popular on Felife. However, either this photo isn't kinky enough or I'm not showing enough boobs to be popular. For whatever reason, the appeal of the photo is limited to spankos so it didn't make it into that hallowed group, Kinky And Popular. At least my friends liked it.
I met a number of people I had only seen on Fetlife that weekend--Steady Laughing, Gatita, Geekybaker, Wicked Enigma, and a guy who went by the name "beginnings", who will also be at CM this summer. In fact, I played with him a bit later that night. He's inexperienced, but willing to learn. Plus, he has a nice collection of London Tanner toys, which shows he has good taste and high standards when it comes to toys. I was nicely toasted and ready to call it a night when I was reminded that there was a Pajama Party that night. I asked if we were going to do each other's hair and make prank phone calls, for which I received a spur of the moment spanking from a nice top. Everything was fun and light here, even if the spankings were hard. I don't like a party atmosphere where everything is so serious. I went back and changed into my pajamas (being sure to keep my bra on as I had no desire to walk around in public without on one) and made an appearance in the public room. I also helped myself to some of Geekybaker's cupcakes. They were delicious and I had already made up my mind that I wasn't going to count calories this weekend. Valorie, Sherri, Geekybaker and a few others took their turns on the spanking bench and the night concluded on a merry note for me. The next day would be even more fun and I will write about that tomorrow.
Posted by Cheryl at 2:02 PM 1 comment: