Smiling Is A No-No? Who Knew?

Having been active in the spanking scene for ten years now, I've come across all types of people. Usually, I make an effort to understand what drives people to be "into" certain things. This is mostly because I find this kind of thing fascinating. It's the same feeling that draws me to read true crime books. I just have a thing about finding out what makes people tick, whether good or bad. It should be pretty obvious to anyone on Fetlife that my "thing" is spanking, pure and simple. So when I get a message from a stranger asking "Do you enjoy spanking?" I usually reply "Isn't it fairly obvious?" I have almost a thousand photos on my profile, almost all of them showing me either getting spanked or showing my red bottom afterwards. Yeah, I think it's pretty safe for anyone who sees my profile to assume I enjoy spanking. If my photos don't make that fact abundantly clear, then my fetish list should.

Anyway, the other day, a someone new friend, Tracey, surprised me with a visit. He's a rather tall, fairly good looking guy who just happens to love spanking women. He's a left-hander and has pretty large hands so his spankings are always a thrill for me. The other day, he gave me one of the most awesome spankings I've ever had. It's not that it was particularly hard, but it was just so darn fun. We both laughed and laughed, even after the spanking switched gears from his hefty left hand to a silicone bowl scraper that I keep in my toy bag. Tracey doesn't like to be photographed himself, but he does like to take pictures of his handiwork. So when we finished, he took a couple of pictures of me, still laughing and smiling from my spanking. After he left, I downloaded them to my computer and went about the task of editing them so I could post one on my profile. I chose this one: 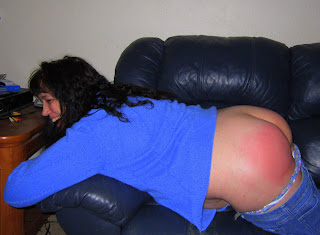 I thought it was one of the best pics I ever posted and it got quite a bit of notice among my Fetlife friends. Because of the way the activity feed works, it also got noticed by a few others. Later that afternoon, I got three messages in my in box; two from doms and one from a master. All three took exception, to varying degrees, to the above photo (and others on my profile that show me smiling). The first one came from a dom who lived far enough away that the thought of us ever meeting was absurd. He asked "Where do you get off laughing at the One who has been put in authority over you? From the redness on your ass, I have to assume that a lesson was supposed to be learned? And yet, there you are, laughing like it's a joke. What kind of sub are you?" Well, I drank this in and gave it some thought before I answered. I told this guy that I wasn't ANY kind of sub, that my profile says "bottom" and that the man who had spanked me was a friend and not anyone in authority over me. We had just done it for fun and I wanted the photo I posted to relay that feeling, which I thought it did. The next message came from another dom, this one located a bit more closely. "You have a very beautiful ass that reddens nicely. But I notice that in today's pic you're smiling? Is this something your dom allows? Or do you do it to intentionally provoke Him? I think that pics like this, when viewed by other subs, sends a very dangerous message: that it's OK to be defiant and laugh at what looks to have been a pretty serious spanking." So now I not only do it wrong, but I'm dangerous, too? I wrote him back telling him that the man was a friend and I'm not a sub, blah, blah, blah. The last and most sinister message came from a so-called master. "About the photo you posted today...may I ask you a few questions? First of all, why are you dressed? A good slave is always naked when in her Master's use. Also where are the restraints? I can't believe your owner allows you to just assume any position you think is OK. If I were your owner, I would tie you in such a way that you would be fully exposed, then I would gag you with a gag too large for your mouth. Then I would beat you until the blood dripped down your legs. Then I would give you a couple of hours with a Hitachi to see how many times I could make you cum. Then when you're thoroughly humiliated and used up, I would take a pic of you with your tear stained face and post it. You obviously need more training." Wow! My "owner"? What am I? A car? I gave some thought to reporting this guy because his message was clearly threatening. However, when I looked at his profile, I saw that he was a 26-year-old master. My response to him was not nicely worded, I assure you. I told him to read some more books and watch a few more videos before he sends messages off to strange women telling them what he would do to them. I asked where he got his nerve, telling me how I should be doing it. I told him spanking is what I enjoy and I wanted my photos to convey that feeling. Smiling while being spanked is something I have long done. In fact, I've done it since my earliest days in the scene. Here's the first photo ever taken of me smiling while being spanked. It was taken in October, 2003: 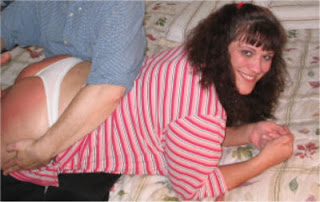 So for me, smiling while being spanked has a long and illustrious history. I should say that most of the comments I get regarding these photos is complimentary. But there will always be people out there who take it as a personal affront if you do something differently than they do. They get all indignant at a girl who dares to enjoy it on her own terms and has the temerity to actually post photos of herself enjoying it. The second message I got from that first dom (the one who lives really far away from me) said that, while it's OK to enjoy fun spankings, one should balance the fun with training and learning. I told him that I have been doing it this way for ten years and have never gotten any complaints from the gentlemen (and not a few ladies) who have spanked me. "We just do things differently is all," I told him. I never did hear back from the so-called master.

So here it is for all of you doms and masters out there: this is MY kink. I do it the way that gives ME the most enjoyment. If you take exception to that or lose sleep over the fact that there's a lady out there who has the unmitigated gall to do it on her own terms...GET OVER YOURSELF.