My buddy, badsherri, and I were eager to get on the road Wednesday morning. However, there was s0mething I had to do first. I had to stop by work and take my Health Risk Assessment. This is a charming little piece of blackmail whereby the company forces its employees to submit to height, weight and measurement checks and also to give a blood sample. I had this done at 6:15 in the morning because we wanted to be on the road as early as possible. Aside from taking my wrist, waist and hip measurements, the nurse asked me personal questions about my lifestyle. Then I was taken next door to give my blood sample. I had just had blood work done at my doctor's office less than a month earlier, but the company insisted that I have it done again so their lab could see my numbers for themselves. Anyone who failed to participate would be forced to pay the full price for their insurance premiums. H0wever, failing to get an acceptable score would disqualify an employee from getting the discounts, so it's a lose-lose situation for someone like me. Despite all the healthy changes I've made (quitting smoking, not drinking and losing 50 pounds) I know there's no way I will pass it because they make this test almost impossible to pass.

Anyway, when I was done with that, I went to check the schedule to see what day I would have to return to work. But the schedule wasn't up yet. This isn't unusual and under normal circumstances, wouldn't even be that much of a problem. However, I was leaving town and my boss would have no way to contact me. So I asked my Human Resources lady to get in touch with one of the managers. She wasn't doing anything else, but she acted put out by my request. I finally did manage to speak with one of my assistant managers and she assured me she would let the scheduler know not to put me on the schedule until Tuesday.

After this, Sherri and I hit the road. We had already packed the car before we went to my place of employment so that we could just hit the highway right after. We did stop in a small town about 20 miles away for breakfast. I had had to fast for that blood draw so I was famished. The little cafe where we stopped was pretty busy, even at that early hour (about 7:30). The clientele was mostly pig farmers and construction workers. There was a small television tuned in to one of those extremely annoying morning news shows. Since the Boston Marathon bombings had happened only two days previously, that was the main thrust of the broadcast. It was depressing. But the food was excellent--hot, filling and cheap. Once we had our stomachs filled, it was time to get on the road in earnest. In fact, except to gas up, we didn't stop at all. Before I knew it, we were in Ohio. Seeing the "Welcome To Ohio" sign made me think of my scene buddy (and fellow Cardinal fan), Tony Trystero. I wished that he was making the trip this year, but events conspired against him and he had to miss BBW this year. 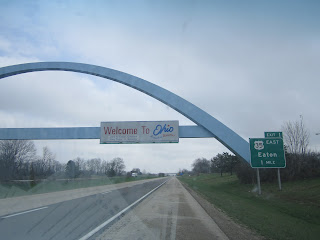 The topography didn't change much until we passed through West Virginia into Pennsylvania. And we were actually only in West Virginia for about a half hour, just passing through Wheeling in that little part of the state that juts out. But it began to get pretty hilly and both Sherri and I noticed that our ears were popping. Pennsylvania has a lot of historical significance to it. There's Gettysburg, Harrisburg, Donora (the birthplace of Hall of Famer and Cardinal great, Stan Musial), and lots of others. If we hadn't felt the need to travel on, we might have stopped in some of these places. But we couldn't. I tried to take photos of the amazing scenery, but we were going too fast to get good pictures. 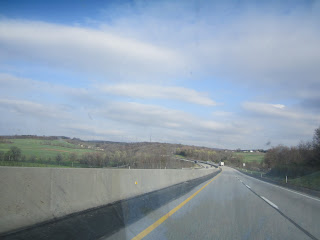 But this gives you some idea of what the terrain was like. As we travelled further through Pennsylvania, we began to see actual mountains. Not being great at geography, I wasn't sure which mountains they were, but I guessed maybe the Allegheny Mountains. Whichever ones they were, they made our ears pop a bit. Neither of us got car sick though. I know what you must be thinking: OK, Cheryl, you saw some mountains, big deal." Well, to me, it was a big deal. Being from the Midwest, the only mountains I'd ever seen were the Ozarks when we would go to visit my grandparents in Southwestern Missouri. So yes, seeing mountains was an incredibly big deal to me. Wait till you see the fuss I made over seeing the ocean. Pretty soon, though, it dawned on us that we had been subsisting on the snacks we'd purchased at the gas stations where we stopped to fill the tank and that we were both tired and hungry. We were on the Pennsylvania Turnpike by now and there was quite a selection of restaurants and hotels. We got off the highway just outside of Harrisburg (where the infamous Three Mile Island nuclear disaster had happened in 1979) and found a nice little restaurant. When we pulled in, there was a lady there with a big van cleaning her windshield. She was transporting some beautiful dogs to a show out west and Sherri and I both stopped long enough to admire them and make some conversation with the lady and her travelling companion. Travelling by car can be isolating and it was nice to have another person to talk to. We went inside the restaurant and, even though it was getting a bit late, were shocked to see that we were the only customers there. An Amish man came in while we were looking at menus, but he didn't order any food. We weren't in Illinois anymore, that's for sure. I've heard conflicting views on the Amish people-- that they are both prickly and clannish and also welcoming and friendly. This was my first time seeing one up close. We have Mennonites in Illinois and they are not friendly. At least, that's been my experience. Anyway, we settled in to wait for our food and it was then that I noticed the "Life Rules" sign that hung near the door. 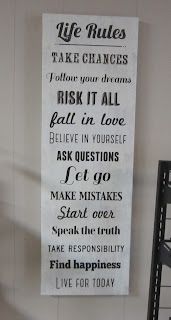 This is the kind of thing one would expect to see posted on someone's Fetlife profile, not on a restaurant wall so I had to  get a picture of it. Actually, I found it kind of sappy, but interesting enough to photograph. I didn't want to go overboard with the pictures, but I wanted to have some kind of record of our travels. I know people who travel a lot get kind of non chalant about it, but I don't do that much travelling, so it was a big deal to me.

Sherri and I filled our stomachs, while making small talk with the waitress. Of course, the television was on and the waitress had it on one of the 24-hour news channels. Again, the Boston Marathon bombings were the main topic. In fact, they were the only topic. Nothing else was newsworthy. Once we finished eating, it was time to start looking for a hotel. The waitress said there was a hotel right across the street that was "reasonable" and so we headed there after settling up the bill. The hotel turned out to be more like what we call a motor lodge. We went inside and the proprietor welcomed us. His experienced eye made us as weary travellers (or maybe it was the Missouri license plates on Sherri's car) and he was eager to get us settled in for the night. However, a room with a single bed was $80 a night. We explained to him that we were on a budget and a tight one at that. Now this wasn't a chain hotel so the man was free to be a bit rude. "My expenses are the same as anyone else's" he told us when we balked at the price. We apologized, but said that $80 was too steep for us and we headed down the road to find something more to our liking. Tired, cranky and worn out, we found a Roadway Inn and stopped. A room with two double beds was $50. That was more like it. Plus, a very generous man who was standing in the lobby when we came in gave us a $10 off coupon, so we ended up paying only $40 plus tax for the room. We brought in only the things we needed and collapsed on the beds. We were literally too tired to think at this point, but knew that a good night's sleep would fix everything. And it did.

The next morning, we had the free breakfast and were soon on the road again. We knew we didn't have far to go before we were on the New Jersey Turnpike and, when we turned on to it, our excitement mounted. 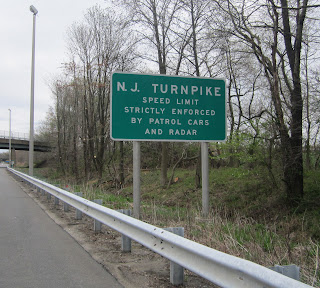 Despite having to ask a road worker if we needed to stay on this all the way to Atlantic City, we were getting really excited. But I was also scared. We were far from home, two women travelling alone. I'd watched enough true crime documentaries and read enough books to know what can happen to women travelling alone. But I knew that Sherri was much more savvy and street smart than I was. Once we got on the Atlantic City Expressway, we were home free. It was only a matter of minutes and the hotel was in sight. I had doubts that this was actually our hotel, but those would be quelled soon enough by the appearance of someone we both recognized.

Tomorrow, I'll describe the first night of the party :)
Posted by Cheryl at 3:29 PM

thanks for this sharing.
Hey friend, Migrate your Existing Application into the Cloud Quickly and Easily with Hybrid cloud