A Woman My Age

According to many of my vanilla friends, I'm an old woman. Now I'm not saying that they call me this. But they almost universally agree that it's time for me to act "my age". 'What does this mean?' I ask. Well, they respond, it's time for me to stop running off to Chicago all the time, for one thing. I go to Chicago (for spanking parties) only two or three times a year. And what's wrong with that? Because I'm going to turn the Big 5-0 this December, I should sit at home and knit? I should see my friends? Which usually causes them to ask why they never get invited on these jaunts. I tell them, as diplomatically as I can, that they wouldn't enjoy themselves if they went with me. They also think I don't dress appropriately for "a woman my age". You know, I think I'm one of the more conservative dressers that I see, especially in the scene. I buy the bulk of my clothes come from Wal-Mart for crying out loud. What's wrong with the way I dress? Or do they think I should stop wearing jeans and start wearing those polyester stretch pants that my mother liked when she hit middle age? In fact, looking at pictures of her, she started wearing them when she was younger than I am. In fact, my mom looked older than me when she was ten years younger.
The fact of the matter is that, because I didn't marry or have kids, I don't look my age. Most of the women my age are grandmothers. But I chose not to go the wife and mother route. So if I look and feel younger, why shouldn't I accentuate that? My twin sister has already died. I've learned firsthand that life is too short not to live it.
Now I'll be the first to admit that it was a lot easier for a mature woman like me to be in the scene when I first started. Most of the men I played with were still older than I was. Some of the men were so much older than I was that, even at 42, I was a sweet young thing. 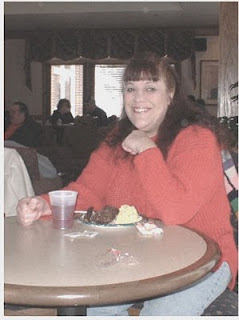 Now days, I find more and more that the men are at least my age or a little bit younger. Now there may be a couple of reasons for this. Seven years after I first started, some of those older guys have probably retired from the scene. Also the advent of places like Fetlife, who attract younger members. When I first started, we had Yahoo groups and that was about all. Believe me, when I first started in the scene, I never envisioned getting spanked by someone more than 15 years younger than I was. One of my favorite tops was born the year I graduated from high school. And you know what? My age never comes up. In fact, the young men I've played with never make my age an issue. Some of the older guys are, in fact, looking for younger girls because they want the Daddy/little girl dynamic and that would definitely not work with me. I mean, I'm not going to wear a plaid skirt or suck on a pacifier. I actually had one young top tell me he prefers to play with older women because the young women he's met are mostly "head cases". Maybe as older women, we've had time to exorcise our baggage. Whereas the younger women are still lugging theirs around or trying to get rid of it. Many of the younger women are looking for a father figure and it's pretty easy for them to find it in the scene. Any man who was going to be a father figure for me would have to be in his late 60's or 70's.

The big Crimson Moon party is coming up this weekend and I'm psyched up like I haven't been in a long time. Yes, I know there are men who don't ask me to play because I'm to old or too heavy for their fantasy. And that's OK. Everyone is entitled to their preferences. But I plan to go to Chicago and have a mind blowing good time...for a woman my age.