Sometimes, a chat is just a chat. And sometimes, a chat turns into something. I was chatting the other day with a gentleman I met on Fetlife. He had a wonderful profile and this profile contained four or five pictures of wonderful wood toys. Turns out, he makes them himself. Now he's not some guy who buys some cheap culled lumber, uses an old paddle as a template and then cuts a new one out of this cheap lumber. No. He uses beautiful wood, some of it is pretty exotic. His toys come in purple heartwood, padauk wood from Africa (which has a beautiful orange color), bubinga, mesquite and other beautiful woods. He uses many of the same woods that my favorite woodworker from Texas uses. However. this guy lives in the Southwest; in Arizona to be exact. I left a comment on one of his pictures complimenting his work. He sent a friend request (which I accepted) and I asked him to look me up on Yahoo for a chat.
We had a lovely chat and he offered to send me a box of toys with no obligation to pay for them. This was a very generous offer and I told him so. I let him know how grateful I was for his generosity. So many times people do things (like make toys) simply to get something in return. But he simply wanted the satisfaction that comes with knowing that someone is enjoying the fruits of his labors. So now I eagerly await the arrival of the lovely new toys he's sending me. Of course, I'm planning on taking them to the Crimson Moon party with me and hopefully, a few people will notice the new toys and ask me where I got them. So I guess part of him giving me those toys is to drum up some business for him. But I don't fault him for that. I can't expect him to give me a bunch of expensive toys and then not get anything for his work. Now I know that he offered me the toys. But I still think he should receive something in exchange for sending me all those toys. Plus he's sending three other paddles to see if I can get anyone to buy them. This puts me in somewhat of a bind because Crimson Moon is having a vendor's fair. Everyone who's showing their wares at the party paid for a table. I'm going to go to the party and show his paddles to friends without participating in the vendor's fair. Is this fair to those people? Of course not. Now I realize I'm not selling a whole bag of toys. It's three paddles. But it's the idea. It makes me feel a little dishonest. I will only be able to show these paddles in private. Even though I highly doubt the board members would say anything about me selling three paddles; especially since it's in exchange for getting a whole bunch of paddles for free. I doubt they would blame me.
There are few things I love more than getting new toys. Buying them directly from the vendor is nice, of course. But buying them online and then having to wait for them to arrive just adds to the excitement. Cigi loved getting new toys, too and would act like a kid with Christmas approaching whenever she ordered something. 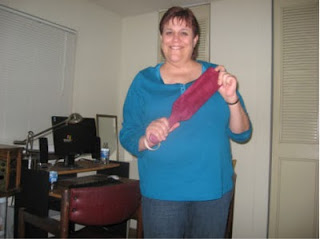 This was a photo I took of her just after her new purple heartwood paddle arrived. Look at the excitement on that face. She could hardly hold it in. This is how I feel about new toys, too. This is mostly due to remembering her excitement whenever anything new would come in the mail. I can only smile as I reflect on how she would feel if she were still here and knew that new toys were on their way. She would be checking the mail everyday. She would be pestering me at work with "Did they come?" every few minutes. But that was part of her charm.

Anyway, the Crimson Moon party is going to be more than the usual party for me. I'm going to be hawking paddles. When I post my party report, I will let everyone know how I did with this. I consider my selling skills to be above average. And, of course, making my bottom available for demos can't hurt. So keep your fingers crossed for me. I've suddenly found myself in the position of paddle vendor.

What a lovely looking paddle. We love well-made paddles... they really are hard to find, because as you say... a lot of people use cheap woods. Does he have a website, what's his FetLife name?

As for the CrimsonMoon thing, we've shown and sold implements at parties outside of the Vendor Fair... including our Spankopoly game. Figure we're only showing to friends and not an an event designed to draw customers... and, it's done in our room (which we paid for). We don't see anything wrong with it, and no party group has ever had an issue. If you're not sure though, just ask.

The paddle in the picture was ordered from Walt Wilbourne from his website:

I have four paddles from this gentleman and they are beautiful (also stingy lol).

The man who's sending me the paddles for the CM party is on Fetlife. His Fetlife name is MrZia. He uses many of the same woods that Walt does. I'm looking forward to seeing and feeling these new paddles.

Thanks for the advice about showing the ones he's giving me to sell at CM. I'm pretty sure that none of the board members would say anything.

Thanks a lot for commenting :)
Cheryl