I can just about guarantee you that tonight's entry has almost nothing to do with spanking. Every once in a while, I have a vanilla thought (though not very often). A few days ago, someone started a thread on one of the Fetlife groups I belong to asking about songs that make people happy. I had to think about it before I answered because I know that I'm a dinosaur with absolutely no knowledge about what's out now. People were mentioning songs I never heard of by bands I never heard of. So I mentioned that I always get a smile on my face when I hear "Cecilia" by Simon And Garfunkel. Of course, thinking of the song made me want to hear it and, of course, I don't have it so I Googled it hoping someone would have downloaded it on YouTube and, happily, someone did. I had a friend named Cecilia back when I was a kid and we used to sing this song to her to embarrass her. It never failed to do the trick (oh, kids can be so mean). I liked going to her house because her parents ran the snack bar at a local bowling alley and they always had pizza and snack bar food there. But her dad was very strict. I can remember him yelling at us for waking him up (he was lying in the hammock and I guess we were making a little too much noise). Funny how kids can do that.


Anyway, listening to "Cecilia" made me think of other music that I love because it puts a smile on my face. One of those songs is "Little Black Egg" by a group called The Nightcrawlers. They were a Daytona Beach, FLA garage band back in the 60's. The song was released sometime in 1967. We had a 15 year old neighbor girl back then who played this record incessantly. Either she would have her little record player out on the patio or she would be playing it on her room full blast. Since our rooms faced each other, I heard it a lot. 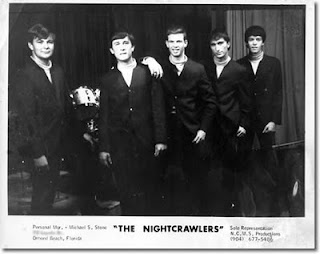 I remember a few of my friends with older brothers who had garage bands and "Little Black Egg" was always on the play list. It has a chimy, jangly almost hypnotic guitar signature, strange lyrics that have never been fully understood (but a lot of people have tried) and the nasal, southern drawl of the lead singer. Also, I have no proof, but his may be the only rock record to feature the quaint southern phrase "gol durn".When I did a Google search of this record, I was surprised to see that it had not only been covered a number of times on vinyl but that it also enjoys current popularity with modern garage and bar bands. The Cars recorded a demo of he song for their "Shake It Up" LP back in 1981 but for some reason, it was left off. It did appear on their mid-90's "Anthology" collection though. The Lemonheads also did a nice version, but they chose to slow the tempo. The Rattlers also did a nice cover on their LP "Rattled" (which features a somewhat disturbing photo of a man with a detonator where his head should be).

And just to add a little spanking to the mix, I recall one of my friends whose brother had a garage band, tormenting them during practice one day until the drummer (the guy who delivered our evening newspaper) got off his drum stool and spanked her bottom until you could see how red it was. I just sat there stunned. I remember this event to this very day because, while he was still spanking his band mate's sister, he turned to me and said "Do you wanna be next?" I shook my head emphatically, though I nursed a healthy crush on him for the rest of the summer. I may have been nine or ten at the time. Hearing this song, either by the original group or as a cover, never fails to make me smile with wonderfully happy memories of listening to my friend's brother and his garage band, of the cute drummer spanking her and of how much I loved music even then.

Fast forward about 25 years. In my early 30's, I was listening mostly to country music because rock and roll had lost a lot of its charm for me. In late 1993 (a year that goes down as one of the worst in my life because I lost both my parents that year and only a few months apart), a group I'd never heard before released a CD that featured another one of those songs that just never fails to make me smile. The song was called "What A Crying Shame" and the group was, of course, The Mavericks. This song has the same sort of jangly guitar that "Little Black Egg" has, which may be what attracted me to the song at first. Then when I saw the video, I was struck by how much lead singer Raul Malo looked like a guy I dated a few years previously. He had that stern, serious look in the video as my old boyfriend. The lyrics sound slightly scolding and I can even picture my ex-boyfriend saying some of the things that were said in the song. 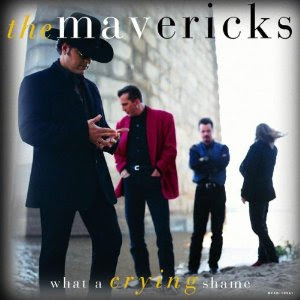 This guy was another of the many boyfriends I had in my younger years who I couldn't get to spank me. He did come close though. We were arguing about something silly (going to the movies or staying home) and I got sort of belligerent about it. He looked up from the paper (where he was looking at show times) and told me "You're acting just like a silly little girl". I scoffed at him and told him "Yeah, whatever...anyway, you won't do anything about it." He told me "Don't be too sure." Well, this was progress, I thought. There was a chance, no matter how small, that he might do something so I had to go for it. He was all ready in a bad mood because of my childish behavior. I had been the one who wanted to go to the movies and had raised such a stink about it that he had left work early so we could go. Now I said I didn't want to go. I wanted to go out to eat instead. With an exasperated sigh, he tossed the paper aside. "You're asking for it", he said, the expression on his face dead serious. "You bet" I said sticking out my chin. "In about two seconds, I'm gonna turn you over my knee. Is that what you want?" "Yeah, that's what I want", I told him. My candid response shocked him to inaction and he simply sighed again and told me to make up my mind. No, Cheryl did NOT get a spanking that night. However, this same guy DID spank another girl at a club a few nights later. She was drunk and coming on to him. He knew she was underage and shouldn't have been there in the first place. He grabbed her wrist (after she threw a drink at him), sat on a nearby chair and put her across his knee. It was the single hottest thing I ever saw him do. He paddled her little underage butt until she howled and her boyfriend threatened to call the cops. Needless to say, the theatrics cut the night a bit short.

When I hear "What A Crying Shame" I think back to that time, not just when the song was out, but five years previously when my boyfriend so much resembled the guy who sang those scolding lyrics that my breath got taken the first time. I also think of my dad, who died the year the CD came out. "What a crying shame" had been a pet phrase of his. He used it a lot. He usually said it sarcastically.

For me, my love of music predates my love of spanking, but not by much. It's amazing how closely the two are fused in my mind and memory. In my childhood, the radio was always on and someone was always getting a spanking, either me or one of my siblings or one of the neighborhood kids. It happened over 40 years ago, but I can still see that cute drummer in my mind's eye, his blond hair tossing off to the side as he came off his stool and lunged at my friend in one motion. He was young, probably no older than 16 or so, but to me, a mere 9 or 10 year old, he seemed mature and wise. Boy, did he ever spank my friend, Trudy. After the spanking, she ran in the house and told her mother. I remember she came out of the house drying her hands on a blue dishtowel and telling the drummer, who's name was Mike, to never cross that line with her child ever again. She told him "If Trudy needs a spanking, her father will give it to her." I remember her older brother, the guy whose band it was and who played a nice lead guitar, saying "Yeah, sure he will." Later that night, Trudy and my sister, Carol and another friend, Julie were having a sleepover at Julie's house and the spanking was THE topic of conversation. Julie was fascinated by the whole story and asked a lot of questions (some of which seem inappropriate now that I think of it). Maybe seeing that cute blond drummer spank my friend is what really fueled my spanking fantasies all those years? And maybe it's why "Little Black Egg" has haunted me all these years? The boys sure played it well considering the equipment they had. The song is heavier on guitar than it is on drums, but I always watched the drummer. He was so cute. I wish, when he had asked me if I wanted to be next, I had had the gumption to say "Yes". Who knows h0w differently things may have gone had I done that?

It's funny how a song will evoke a feeling, a memory...of garages and drummers and summers spent listening to songs that have gone by the wayside. Maybe this is what happens when you get older? Maybe you really do spend more time looking back than looking forward.