Author's Note: Today's entry discusses the paddling of children in a school setting. If this kind of thing upsets you, please find another entry to read. This is not a discussion on whether spanking children is right or wrong. It's simply my own personal recollections of going to school back in the bad old days. 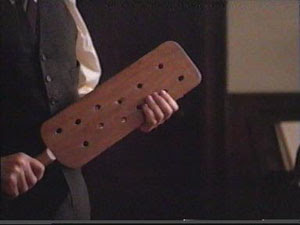 When I got into high school in 1975, I thought I had left the threat of a paddling behind me. It seemed pretty absurd to paddle a high school kid, after all. The kid in the photo is Leonardo Di Caprio suffering the indignity of Catholic school discipline in the 1995 film "The Basketball Diaries". Since I'm not really 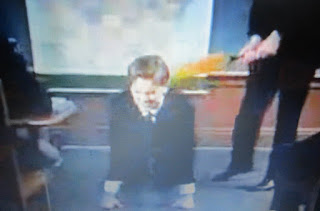 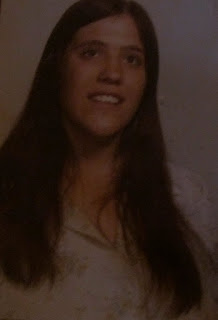 Of course, I was young, firm and nubile. I was beginning to realize my athletic skills, too. He went to his office (which was next door to the kiln on the other side of the hallway) and returned with a mean looking paddle. I took it to be a fraternity paddle because there were Greek letters on it. There was a table in room where he kept paint jars and extra canvases. He pointed to it. "Bend over," he said. I could feel the eyes of every kid in that class on my back as I bent over the table. This still reigns in my memory as one of the most humiliating moments of my life. He told me if he had his way, he would give me ten swats (presumably one for every minute I was late) but admitted he would lose his job if he did. So he told me he would give me five, but they would be hard. Yeah, right. Let me be the judge of that. It was my first taste of a frat paddle over tight jeans. I love the feeling now. But back then, it was horrible. I heard some students snicker as the paddle connected the first time and I let out a little yelp. His delivery was slow and deliberate, as if he was drawing it out as long as possible. When it was over, he told me to stand up. As I did, every bone in my body ached and it took a lot of effort to keep from crying. "Take your seat," he said. That was my last school paddling. Here's the kinky part. I had a date that night (it was Friday, after all) and I told the boy I went out with that I had been paddled that afternoon. The boy asked if I had any bruises. A couple, I admitted. He asked to see and I took my jeans down and showed him. He was impressed with what I had taken. That guy is a top now. I have chatted with him a few times but he isn't interested in playing with me.
So that's my story. The story of what it was like to go to school back when teachers ruled their students instead of the other way around. I recall those days with a mixture of fondness and loathing. I recall the teachers who spanked me and the ones who should have. I remember the public punishments of many of the kids I had in various classes. I remember just the threat of a paddling kept a lot of kids in line. The paddle was an ever-present part of school life back then. Some teachers kept theirs in a drawer, while others hung theirs on the wall as a warning. I remember big, strong boys reduced to whimpering crybabies over the knee of my big Irish sixth grade teacher. I remember weighing the pros and cons of breaking a school rule and wondering if the paddling I would receive would be worth the temporary feeling of victory. These are things modern students need not concern themselves over. This is a world long gone and it exists now only in memories and movies.

that reminds me of my high school days back in late 1970s paddling was allowed in california public schools,male vice principals paddled boys and girls back then ,unlike todays same sex rule in most states.We had a fat old never married perv vp named mr meyers ,he paddled girls more then boys it seemed.
i was office assistant in 11 th grade ,my main duties were collecting slips from teachers and copying tests,handouts etc ,that xerox machine room was right next to mr meyers office.
when i saw a girl sitting in chair outside his officei only listened to girls paddlings) ,i knew she was there to be paddled,so id go into the copy machine room and close door behind me,and put my ear to the wall.
mr meyer would call girl into his office ,then the secretary to be witness ,so no one was in office area to notice me.
mr meyer would tell the girl to go to the small chair(like size of 1st graders chair) against the wall and bend over grab onto the legs tightly.mr meyer grabbed his huge thick paddle,and walked over the the bent over student ,gave final instructions to the student ,stare at dot on floor ,dont look back or get up until i say its over,then hed say you are getting 6 to 12 swats ,to remind you to follow the rules.mr meyer was 6 foot 4 and 275 lbs ,nd swung the paddle like babe ruth.
then id hear the first swat ,a surprised yelp,then swat 2 a louder moan ,by swat 3 most girls began crying,swat 4,5,6 and up brought howling from most girls even seniors

I was sent to the principal's office for a paddling one time, about 1966. The assistant principal was the paddler.
I was there with the other kid, the one who had tried to beat me in the hallway after class. He got three licks. Didn't make a sound.
The paddler then told me that I was getting three licks. I said, "No, I'm not. You're not going to hit me with that thing. You're not going to touch me."
The assistant principal looked surprised. Perhaps no one had spoken to him like that? He then said that if I wouldn't take the licks, I would have to stay after school three days (an hour each afternoon).
I said, "No, I won't, either. If I miss my bus I'll have to walk three miles on the highway to get home."
He let it go with telling me that I had to stay after school whether I had to walk or not.
I rode the bus home and returned in my car. As the bus took 45 minutes and my drive back 15, I was an hour getting back. Since the detention started 15 minutes after school let out, I missed all but 15 minutes of the detention.
He commented that I was late.
I responded that I didn't care, that I had told him the day before that I wasn't going to walk home.
I didn't show up for the last two days. Nothing came of it.
I'm not sure why he didn't do anything when I refused to take a paddling. Perhaps hitting a student without parent's or the student's permission wasn't allowed?

Jim Bob, it is not too difficult to reason out that it most likely is because that assistant principal did not personally approve of the otherwise set-in-stone policy that 'both' fighters were to be paddled, regardless that he believed you when you said that you were the 'victim' rather than the 'aggressor'.

You wrote: " I remember just the threat of a paddling kept a lot of kids in line."

It has an effect where kids are more scared to break small rules, but it also has an effect where people become more violent because they are used to seeing serious violence, and not just seeing it, but seeing authority figures presenting it as a positive. It has a hardening effect on a person's spirit. I think that alot of "old" generation teachers were mean because they themselves had been beaten in school.