Saturday promised to be a busy, but fun-filled, day. The three of us actually woke rather early for breakfast. We went back to the same place on the boardwalk we'd had breakfast the previous day. Unlike last year, when it was at 11 o'clock in the morning, the Uniformed Top event was to be held later in the afternoon. So there was no rushing around to try and make it on time. We had time for a leisurely breakfast and a stroll on the boardwalk. It was a beautiful day and promising to be a bit warmer than the day before had been. All in all, the weather was a vast improvement over last year. I know people think that the weather doesn't matter. After all, we're in a nice, warm hotel. But for me, the weather really does affect my moods. Last year, when the weather was cloudy and cold and I was suffering from broken ribs, it really did make me feel less like partying and more like just spending the time in my room. Getting the news that Big Jim, one of my fondest friends in the scene, had died didn't help. Anyway, I was just really happy that we got nice weather for this party.

When we returned from breakfast, Sherri and I went across the hall to Dark Steven's room. I knew he was in the room right across from ours and we had messaged each other months earlier about playing. I liked his sense of humor in the groups and thought he might be fun to play with. I brought Sherri along just in case because sometimes people don't behave themselves and also to take some pictures for me. I was becoming aware that, pictorially, this party was weak for me. I didn't get many good pictures during the previous days, so this was  the day to make up for that. We spent a good deal of time talking before we ever got down to playing. But once we got started, it was fun. Steven has a nice, hard spanking hand and got right down to business. 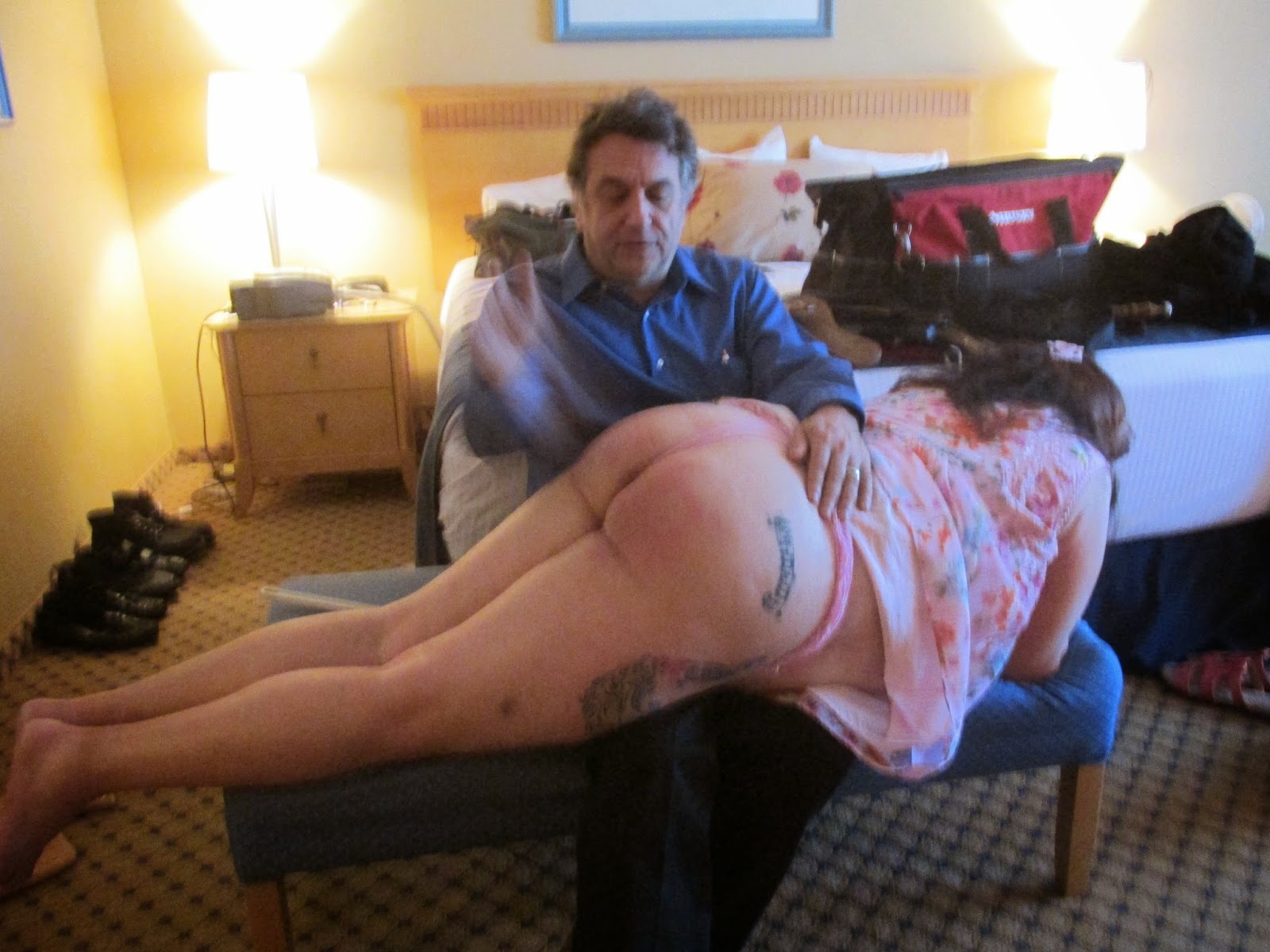 This photo makes me a little bit uncomfortable because it shows how much bigger I am than Steven is. I was grateful he had a suite with one of those benches in it. Those things are perfect for spanking. And they absolutely rescue people like me; people who have issues with being comfortable when in the OTK position. So not only was my weight supported, but my knees were, too. Recently, on Fetlife, a man started a thread in which he railed about the things he hated and thought were silly in spanking videos. One of the things he mentioned was seeing spankees being supported on beds and couches. He was adamant that the spankee should not have any concessions made for their comfort. And this was a guy who wanted to get together and play with me (before he blocked me because I'm a conservative). I'm glad now that I didn't get together with him. I can just imagine how he would have felt about me needing support for my bad knees. I will only play with people who are sensitive to my needs. And Steven did, that is, until he whipped out the bath brush. 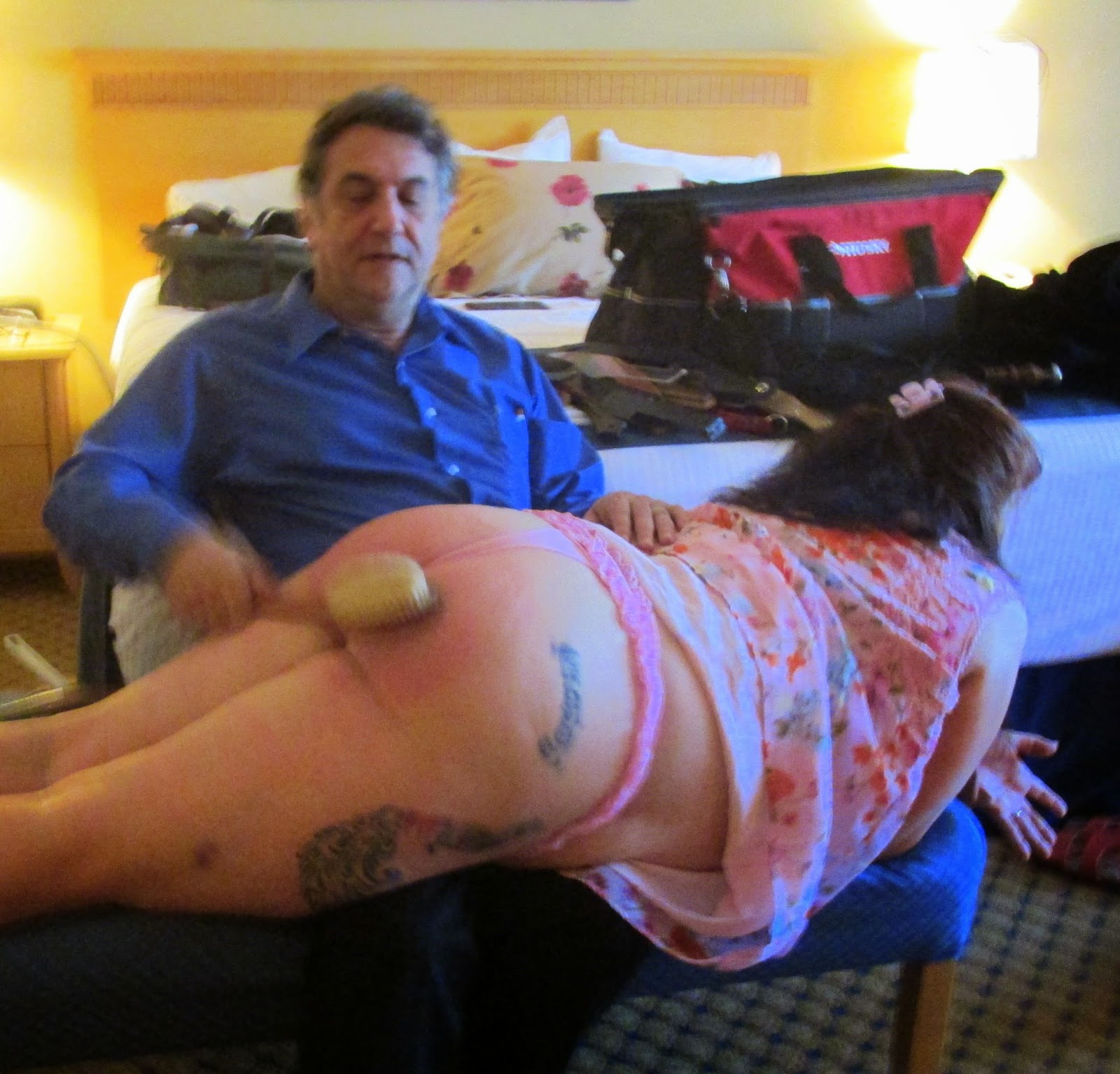 Now, on Fetlife, I know that I make jokes about breaking these things, but believe me, this thing wasn't going to break. I had a lot of fun with Steven. He even gave me a nice caning to wrap things up and Sherri got some nice pictures. 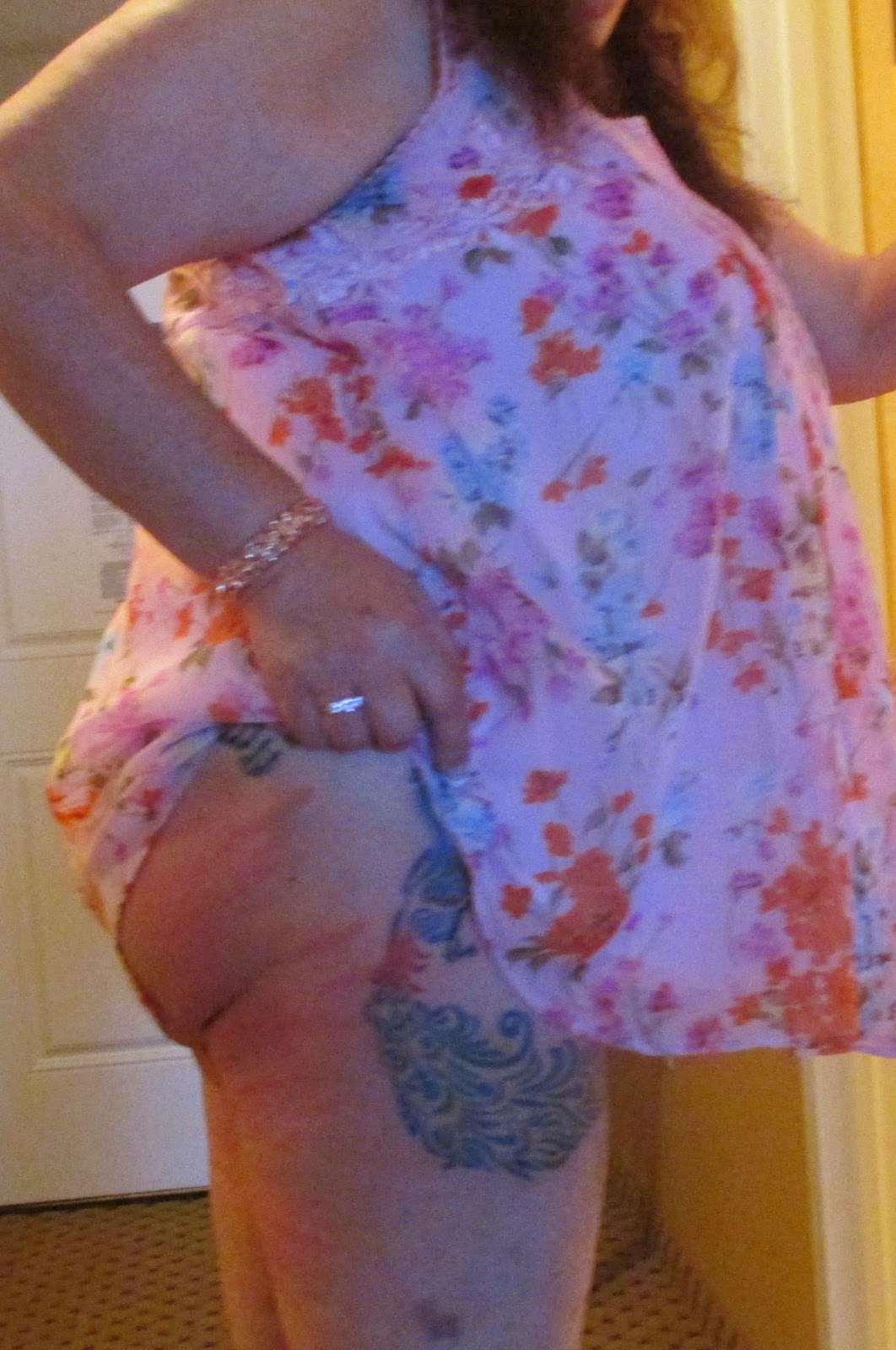 The cane marks are visible, but they didn't show up as bright as they actually were. After that, I wanted to rest up and get changed for the Uniformed Top event.

For anyone who doesn't know what the Uniformed Top event is, it's a one hour event where the men dress in uniforms or costumes and stand on the stage. We female bottoms get our pick of the men and they aren't allowed to say "no". They know this going in. This year we had over 100 tops participate and more bottoms than that. It was a very hectic hour, let me tell you. There were no cameras allowed in the ballroom so I don't have any photos of it. I got spanked about 25 times and loved all of them. Because the men can't say "no", it's a good opportunity to play with a top who might have blown you off under normal circumstances. This year's event was a contest. The winner got a half price ticket to the party of her choice. And lest you think that that's unfair because a man couldn't win, the top who spanked the most women got the same deal. No one kept tabs. We were on the honor system. Like last year, I first chose a man in a baseball uniform. I got spanked by the usual assortment of cops, cowboys, construction workers, military men and doctors. In fact, FunAllowed gave me one of my most charming moments of the party. He was dressed in a doctor's smock and when he was done spanking me, he reached into a pocket and gave me a sucker. It reminded me of the days when I was a child and the doctor always gave me a sucker, whether I was a good patient or not. Despite the fact that the room got a bit warm with all the activity, it was a most enjoyable hour. The best part was all the wonderful sounds of spanking. Yes, there were tops I didn't get to, but all in all, it was a blast. As I was leaving the ballroom, one of the tops I didn't get to wanted to play. I was literally just about spanked out. But I wanted to play with him, so I asked him to give me a half hour and then come up to my room. Sherri and KJ went off with Tom and Nancy for a snack and a drink. I laid down on the bed, only intending to rest. But I must have dozed off because I heard a knock at the door that roused me. It had felt so good, after all that noise and activity, to have some quiet time. Frankly, I needed some time alone. The guy wanted to play with me and I saw no reason to deny him that. So I explained to him that I had just woken up and I needed a minute to gather myself before we started. The man I played with is a pretty hard spanker. I felt like, because I just woke up, my tolerance was sub par. However, I didn't hear any complaints from my partner. He really put some nice color on my bottom. 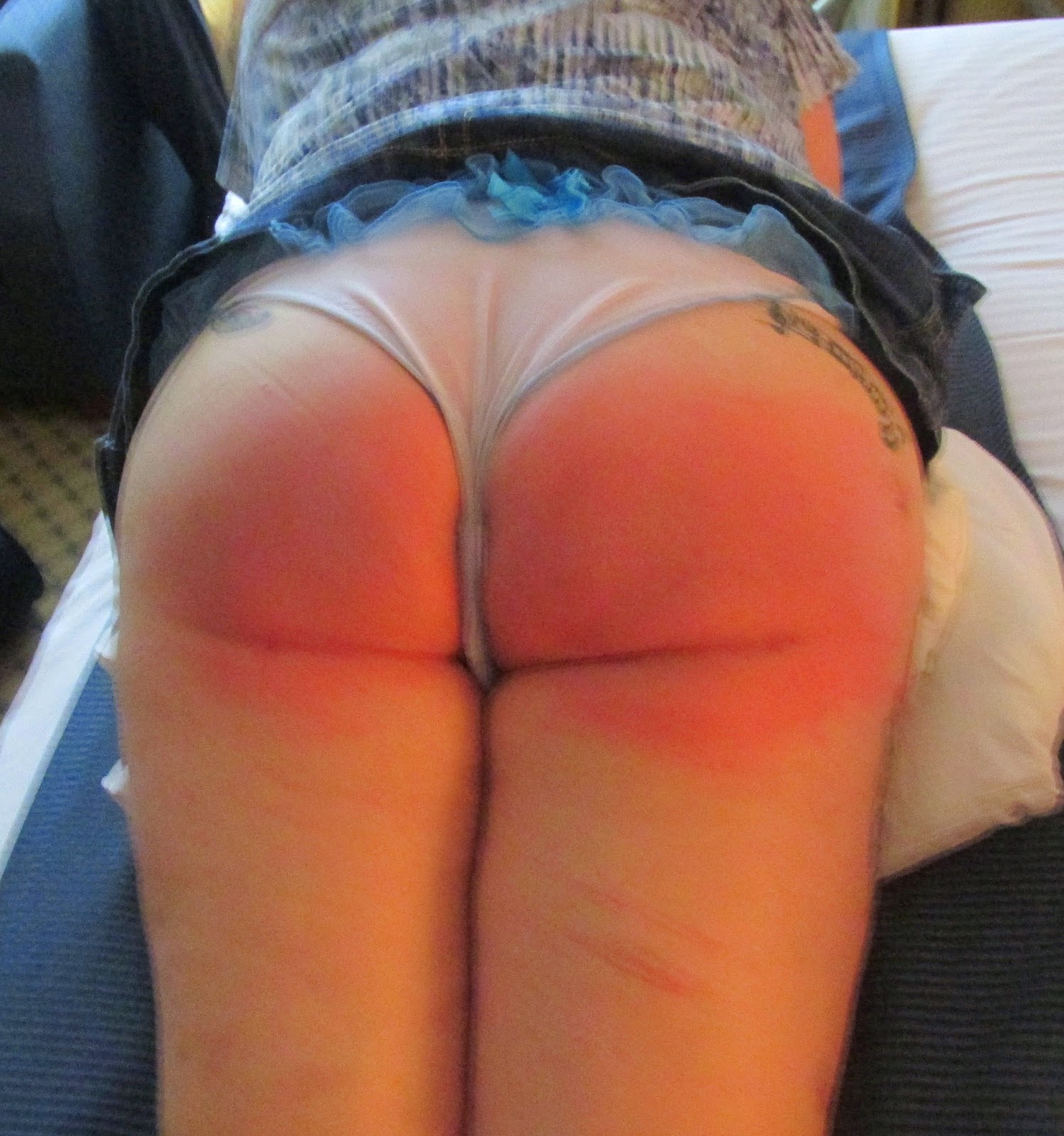 It was a really fun scene with this guy. But now, I had to think about getting ready for the Man Men dinner dance. The dinner was a catered affair, as it had been last year. All of the ladies were encouraged to dress in early 60's chic, which most of us did. Sherri stressed somewhat over which outfit she was going to wear, but there was minimal drama around getting dressed. I had to do the best I could with my hair. The lady who was supposed to do it had not been able to attend due to a death in the family. 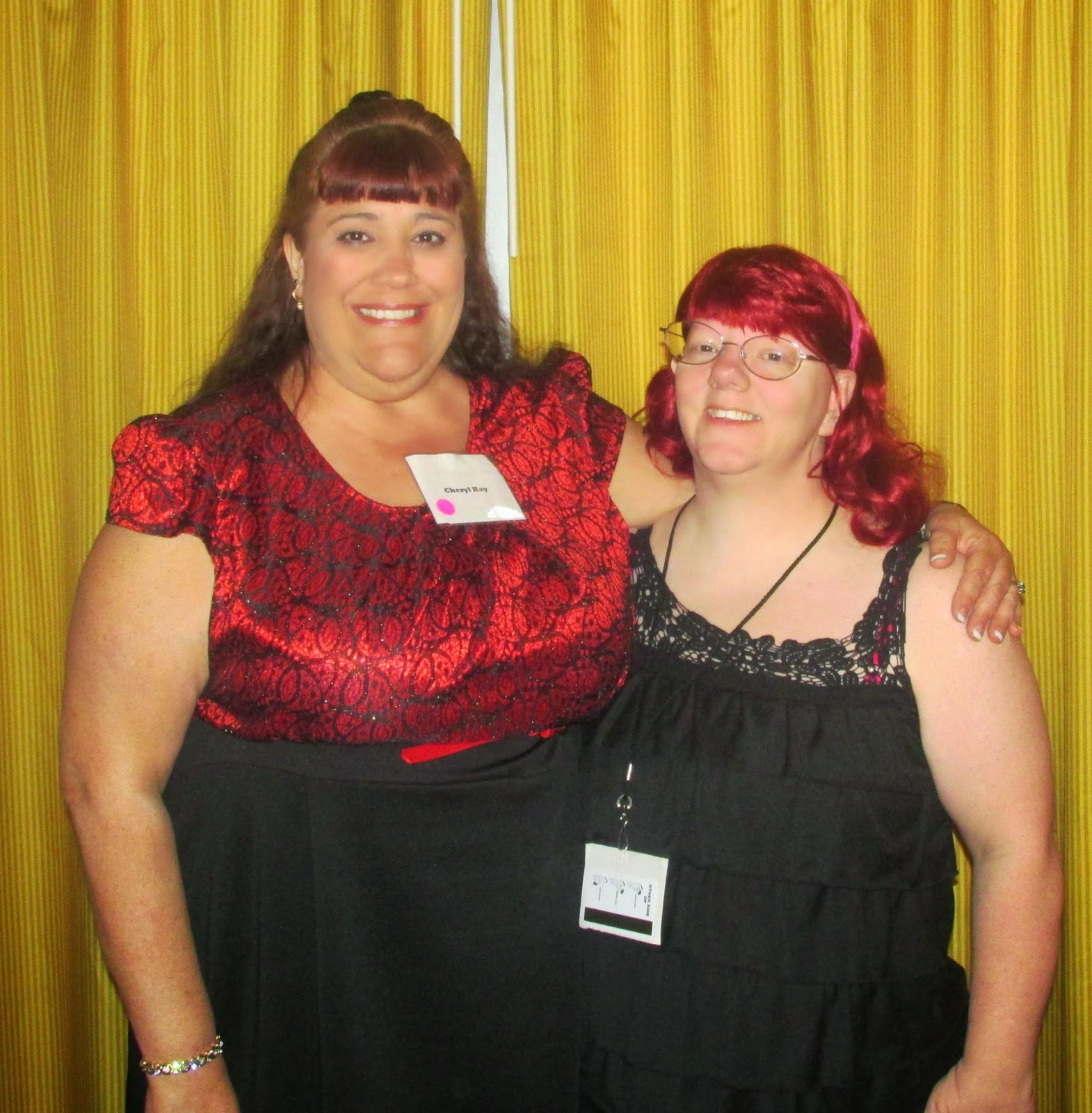 My dress was an unfortunate choice. It makes me look huge. But it was too late now to do anything about it. Dinner was amazing. The short film they showed was funny, too. They also did some spoofs that were funny. One was a spoof of "When Harry Met Sally" called "When Harry Spanked Sally". The spoof centered on the now-famous scene in the restaurant where Meg Ryan schools Billy Chrystal on how a woman easily fake an orgasm. In our film, Jules shows a top how she fakes making the top believe the spanking was good. It was full of fake "ows", "I didn't mean it"'s and "I'll be good"s. Hilarious. I hadn't laughed so hard in a long time.

After all the fun was over, we had a scene wedding. Two young people "tied the knot", complete with a spanking for the bride when it was over. I'm quite sure they will have a real ceremony at some point. Once the wedding was over, people were getting up to dance, following the lead of the bride and groom. My dancing days were over so Sherri and I went up the suites to see if there was any action. Tom and Nancy were up there already so Tom obliged me with a nice spanking. 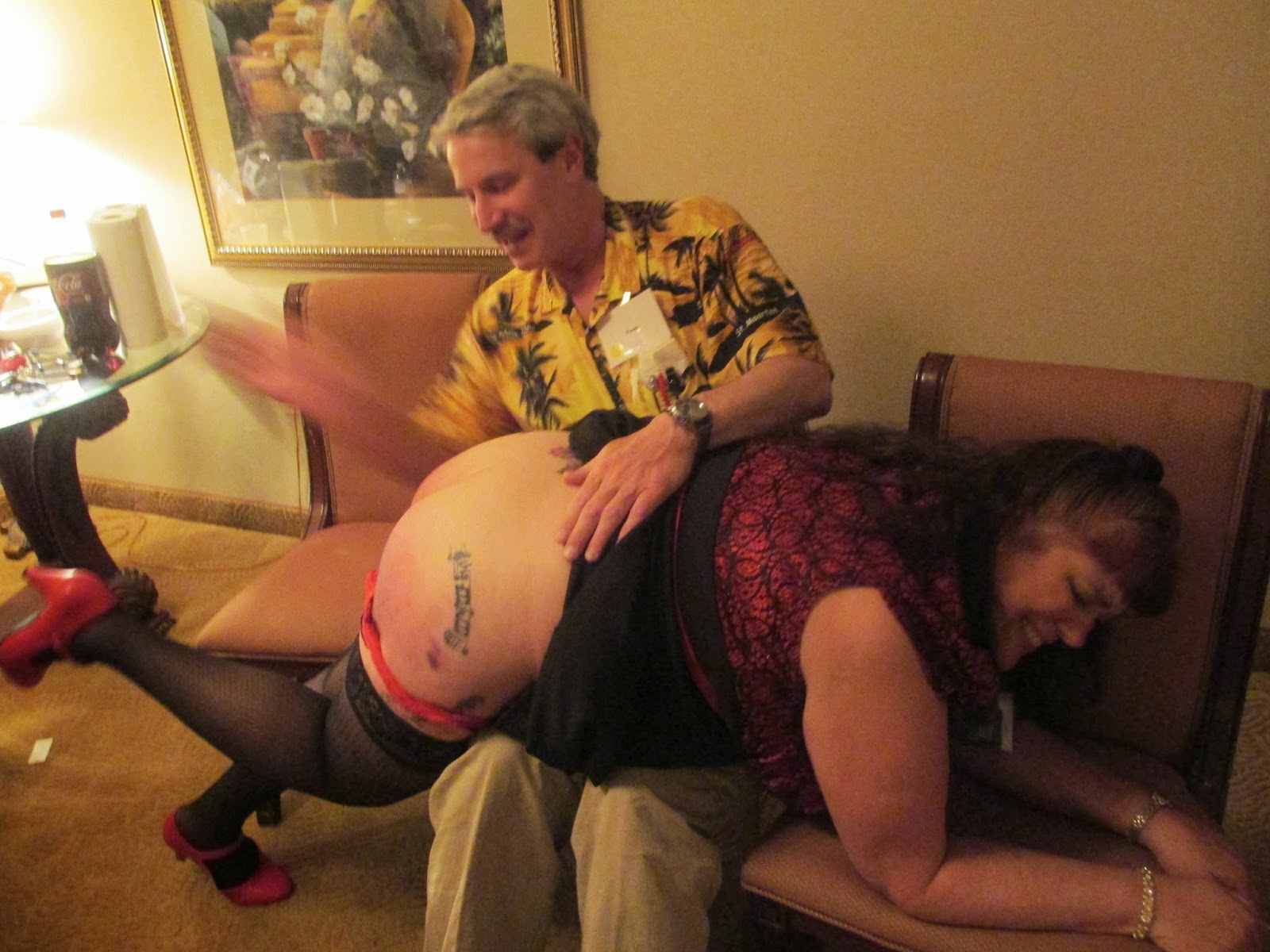 I was getting a little sore. But also, Tom can bring it when he's playing with someone he knows can take it. He always gets a kick out of playing and it shows. He and Nancy have been in the scene for more than 20 years and can teach some of the youngsters a thing or two if given a chance. He has a very stingy hand. 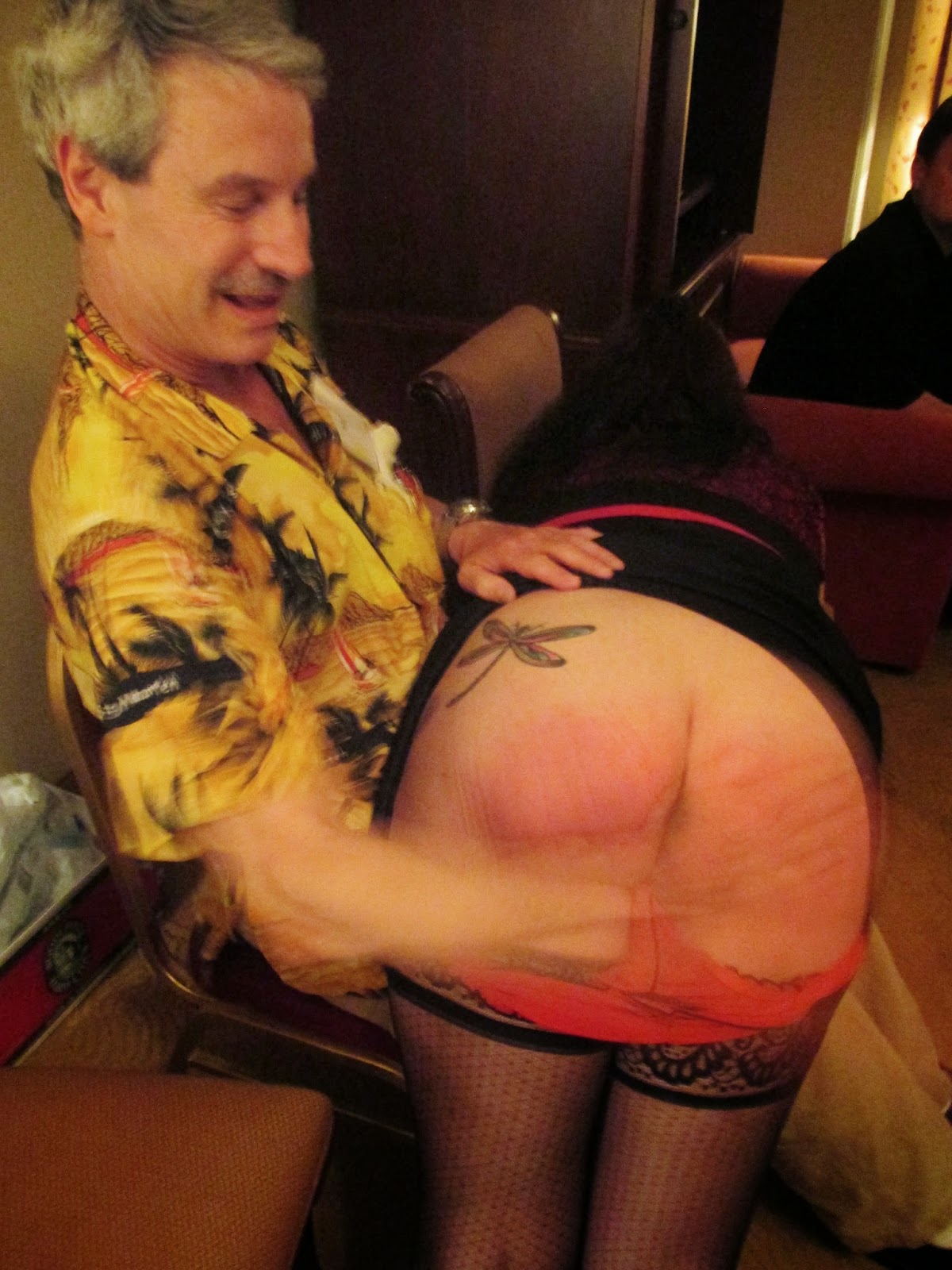 You just have to love a top who enjoys what he does so much. And Tom is far from a sadist, but he does enjoy spanking a lady and watching her turn red and squirm around. There was another top there, a new guy, who had a new strap that I admired. He offered to try it out on me and I was honored. We looked around in several suites for a place, as all of them were pretty full. Finally, we found a place in Mike Tanner's room. That strap was every bit as nice as it looked. Unfortunately, I forgot where I put down my purse and I misplaced it. It was right there in Mike's suite next to the bed, where I put it. But when I went back to find it, there were so many people in the room that I couldn't get a proper look without interrupting the scenes that were going on. So I had to wait until they were all done and clearing out before another party goer found it, right where I'd set it down prior to my scene. But I was so floaty from the awesome strapping that I think my brain was disengaged. Jules and Mike were a big help to me, as was Nancy, who assured me that nothing would be taken out of my bag and that it would be found. I felt like a colossal fool for making such a big deal out of it, but I had some very valuable things in my purse--cash, my debit cards, not to mention my phone. I was so emotionally spent that I decided to call it a night after that. I know that sounds kind of lame, but it was getting pretty late and KJ was going to be leaving us in the morning. I wanted to have some time to talk to KJ before she had to go to bed. I was surprised to see some light bruising on her bottom, indicating that she did get around to playing. She told me she played several times, but wouldn't tell me who she'd played with. I could look at the markings on her bottom and probably guess, but I decided not to press the subject. I was just glad she'd decided to play.

Next, my first "Adult Speaking" cruise.