They Made Me A Spanko 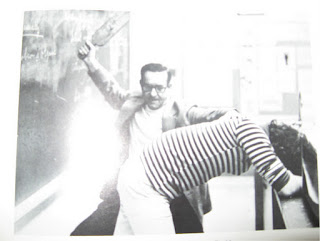 The photo that sits atop this entry is real. It has not been Photoshopped or doctored in any way. How do I know this with such certainty? I was present when it was taken. The man holding the paddle was my Biology teacher, Mr. Stevenor. The boy he's paddling is named Mark (I had behind the wheel with him the previous year). This is a real paddling. It was photographed surreptitiously by a kid in my class who happened to be on the yearbook staff. The photo was taken without a flash, probably using high speed film. This grainy photo actually did appear in the yearbook in 1977. Let me set the stage for you. Mr. Stevenor was a rather old-fashioned guy as you can no doubt guess from his greased back hair. Not many teachers paddled at PHS, but he did. The paddle he's using is actually a hall pass, which you had to have in your possession (be carrying) if you were out of your room for any reason (except when you had a call slip to go see the dean). No, Mr. S. never paddled me. He didn't paddle girls. He gave girls detention. I use this photo to illustrate a point--corporal punishment was still prevalent in the 70's. People can say it was dying out and falling into disuse if they want to, but anyone who says that wasn't there. Granted, here in Illinois, there weren't many high schools that paddled. If you look at the photo closely, you can see that Mark is bigger than the teacher. And that's the problem. By the time a kid reaches high school age, they are less likely to just go submissively to their punishment. Most, if not all, resent being treated this way when they want to be treated like young adults. The sin that young Mark committed is lost to my memory. But his protest isn't. He was decidedly against being paddled. He didn't want to be treated like a child. Mr. Stevenor's reply? "Act your age and not your shoe size, young man, and you won't get paddled."

Now I touched on this in yesterday's entry, but I have given it more thought. Maybe, just maybe, all of the spanking I witnessed growing up did something to me. Maybe it was environment and not genetics that made me a spanko. I always said it was genetics because my twin was one, too. But maybe both of us got our minds warped by the constant, steady stream of corporal punishment in our lives. Except for a handful of times when I thought the spanking was either undeserved or overdone, I have no bitterness about the way I was treated. There were kids who were treated far worse than I was at home. You knew who the abused kids were. They were the ones who came to school with black eyes and fat lips. The kids who wore long sleeves even in warm weather to hide whatever was being done to them. I don't class a spanking given as discipline as abuse. Abuse happens when the line gets crossed. My father used to say that God gave kids nice padded bottoms for a reason--so that when you needed to make a point, you had a place to make it. I knew kids, even in high school, who could have stood a little bit of no-nonsense discipline. Take this scene from "Class Of 1999": 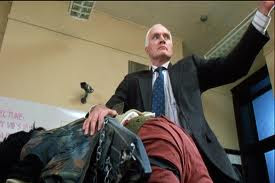 For people who haven't seen this film, it's sort of got a cult following. The film is set in the not-too-distant future, where teenage gangs have terrorized and taken over the schools in large, urban cities. One school decides to hire robots to handle the kids. The History teacher, Mr. Hardin, is a former military robot. One day, a fight breaks out in his class between two rival gang members. Mr. Hardin has a number of options available to him and they flash on the screen as he's deciding what to do. He decides to use corporal punishment. He hauls the boys apart (and I'm very sure these punks are stunned that this little old man has the strength to do that) and pulls them to the front of the class. Once there, he sits on his desk and takes each boy across his knee for a hard spanking, delivered as only a robot can. My sister and I were both impressed with this scene. Now, I'm quite sure those boys thought themselves big men. I'm sure they spent a lot of time bragging about the fights they'd been in and the old people they had mugged. This was a demonstration for the rest of the class. Those boys didn't look so big in that moment when they were squirming under the hand of the new teacher. When he's done with the punishments, Mr. Hardin straightens his tie and asks "Anyone else?" He gets the response he wanted---each desk is placed back in a neat row and the students sit up straight in rapt attention. When I was in school, the teachers who weren't afraid to show the kids that they were in charge and that they meant business were the ones who won our cooperation and respect. There were probably a few exceptions to this, but I'm saying generally speaking corporal punishment got results.
I guess I took it for granted that if I decided to break the rules I would find myself face down getting my bottom spanked. This was both at home and at school. I was a very respectful child, respectful to authority and quite happy to let the adults be in charge. I had enough insight to know that my friend, Robyn (whom I discussed yesterday) was a spoiled brat. A teenage boy had finally had the courage to do what her father didn't and discipline her. It probably wasn't his place, but someone had to do it. I could picture her at home, begging her dad to fire the guy. But he didn't.

Maybe it's because I'm 51 now and feeling a bit old that I've been doing a lot of reminiscing. All that walking down Memory Lane has also caused me to think long and hard about where my spanking kink might come from. I spent a number of years shrugging off the question and saying "Who cares?" when I bothered to answer it at all. Now though, I really do wonder. I wonder if I spend several weekends a year at parties getting spanked, strapped, paddled and caned because I saw and experienced so much of that firsthand? When I got older, I tried to get my boyfriends to spank me, with no real success. I didn't spend much time thinking about sex. But I spent A LOT of time thinking about spanking. I knew I was different. I knew I was weird. I think, in some instances, kids can be much more perceptive than adults. I'm sure they sensed that there was something not quite right about me. My mother used to warn me that I was far too bright for my own good. I had a keen mind and I was always thinking. And when I wasn't thinking, I was writing. I have been writing my thoughts down, in one form or another, since I was old enough to hold a pencil and form words. And I've been doing it pretty much nonstop. I wrote diaries, in which I tried to sort out my feelings (when I was old enough to self-analyze). I wrote stories when I was much younger in which the girl (sometimes a boy) would get spanked. I wasn't sophisticated enough to know that my burgeoning feelings were sexual. I just knew I got a thrill out of spanking and, in those days, it was usually someone else's more than my own. I began to read books that contained spankings (like "A High Wind In Jamaica" or "To Kill A Mockingbird"). I read a lot of Dickens, in which boys got the cane, usually unfairly. And I read and fell in love with Twain's "Tom Sawyer" and the lovable rascal who was the hero of the story. So even at a young age my spanking kink informed the choices I made on what to read, what to write and also how to behave. So if you were to ask me right this very minute if environment or genetics made me a spanko, I guess I would have to say it was definitely environment in my case. I'm pretty sure all of my relatives are fairly vanilla. But it's not something I'm going to ask them. Frankly, it's none of my business. I've had a hard enough time unravelling my own kink, let alone someone else's.
So I apologize if the last half dozen entries have missed the mark. I've spent an awful lot of time thinking about the past and it's sort of rubbing off on my blog entries. With no play dates or parties on the horizon, this is what I've been left with. Hopefully, that will soon change.
Posted by Cheryl at 9:24 PM

VERY INTERESTING!! I love the thinking that you put into your blog!!