For me (and many other spankos of my generation) my introduction to spanking as something exciting and titillating came via movies. There was no Internet in those days and no uncut and unedited films anywhere but the theater (at least until Home Box Office came along). And of course, only network television had series in those days. As I cut my teeth on movie spanking scenes, it should come as no surprise that I still like a good movie spanking. However, modern films offer us precious little compared to those "old standbys" from my youth--"Kiss Me Kate", "McLintock!", "Blue Hawaii" and others.

So tonight, I'm going to critique a few modern scenes. I will note when I haven't seen the entire movie. On some of them, I don't know anything beyond the two characters involved. But on most I've at least read a synapses of the plot. So here goes. First up, the movie I believe opened the floodgates. 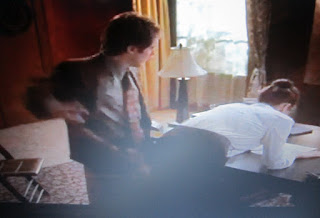 "Secretary" (2002) delves into the ugly private lives of two people--Edward, a perfectionist lawyer (played by James Spader) and Lee, his very troubled secretary (well played by Maggie Gylenhall). In the spanking scene, I feel the scene is well set. Lee makes many typing errors and one day Edward calls her into his office. He asks her to bend over the desk and place her elbows flat, which she does. Then, he spanks her as she reads the error-laden letter aloud (and more than once). The spanking scene, with its build up, is very well done except for Spader's hand. As the spanking progresses, it looks more like he's doing some kind of martial arts than spanking a bottom. This movie also sends a negative message: only someone who's as psychologically damaged as Lee is would be interested in having a man spank her. I was a newbie in the spanking scene when this film came out and I was disappointed in how it portrayed us. 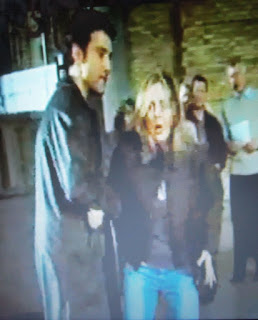 Next up, spanking as a diversionary tactic. British actor Clive Owen spanks a woman in a museum in "Shoot Em Up" (2007). I've already blogged about this film but I felt I need to include the scene here. Because both participants are standing, it's bad from a positioning standpoint. We never really see his hand strike her bottom. Aside from that, the movie is unbelievably, orgiastically violent. This is one of the movie's lighter moments.

Next, a British film that's so dark and depressing it makes "Secretary" look light and breezy. In "Fish Tank",(2009) Michael Fassbender (the oh so lovely Michael Fassbender) takes his girlfriend's bratty, foulmouthed daughter, Mia (well played by Katie Jarvis) over his knee and spanks her for insulting him. Unfortunately, he also sleeps with her so a creepy element comes into play. The scene is realistically brief and Mia's overreactions to the moderate spanks is adorable. Obviously, no one has ever done this before. I haven't seen the complete film but it looks like a fairly sordid film. 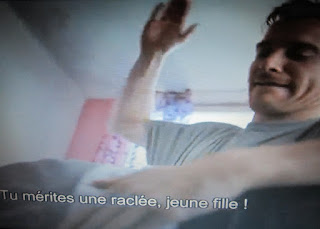 Another teenager who endures a spanking is Hailee Steinfeld in the Coen Brothers' remake of "True Grit" (2010). This is another film I have already blogged about but I felt it worth a mention. Matt Damon as the puffed-up Texas Ranger LaBouef takes the stubborn Mattie Ross over his knee and spanks her, then decides a switch would work better. I liked this scene, all in all and liked the film as a whole. It was duly reported that Miss Steinfeld wore padding and didn't feel a thing. But at least we can actually see him spanking her. 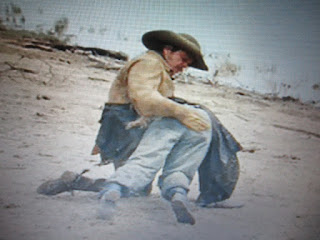 Now on to a television show. I have to admit that I have never watched "Weeds". It's not the kind of thing I would watch. But in the scene in question, Nancy (played by Mary Louise Parker) is taken over the knee of (I guess) a guy she's doing business with and has her dress pulled up for good measure. Now, Miss Parker is no ingenue. I first saw her over 20 years ago in "Fried Green Tomatoes" so it does my heart good to see an older lady in this position. Probably the nicest, most well-filmed spanking I've seen in many years, even if I don't like the show. 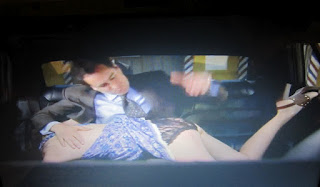 Next, a movie I know very little about. Jessica Alba has her bare bottom whipped with a belt by Casey Affleck in "The Killer Inside Me". Of course, all this whipping leads to sex. But we never actually see what's supposed to be happening. Rumor has it that a body double may have been used for the scene. Not a very good scene in my opinion. When I watch a spanking scene, I want to see the spanking, thank you. 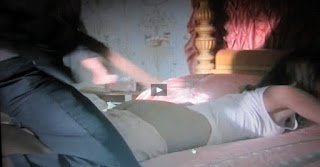 Last, and probably least, the much maligned "A Dangerous Method" (2011). In this film from director David Cronenberg, the relationship between Sigmund Frued (Viggo Mortensen) and Carl Jung (the yummy Michael Fassbender) is explored via the study of one of Jung's patients, a woman named Sabine (played by Keira Knightley). Sabine is a nymphomaniac and also has issues stemming from beatings administered by her cruel father. Again, the spanker is Michael Fassbender. But unlike "Fish Tank", where the spanking of a bratty girl makes the scene enjoyable, there's no real build up here. Also the spanking is rather stylized. In another scene, she's tied to a bed while Fassbender uses a belt on her backside. However, we never actually see the blows land on her bottom (the same problem I had with the previous film) and there are also Ms. Knightley's ambivalent comments about filming the scenes. 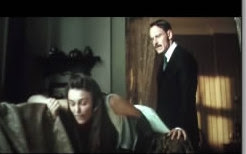 All in all, not too bad for modern movies. I don't think Hollywood will ever again give us a spanking scene as delicious as the one in "Blue Hawaii", where the whole thing is seen and no tricks were pulled. I think modern actresses are less likely to agree to a scene like that (at least not without a lot of restrictions). Most have the same attitude as the very uptight Keira Knightley: I'll do it for art's sake, but it better not be real. This is a shame. I also think that most leading men would be hesitant to do a scene like that because it might reflect badly on them. When "True Grit" was released, I remember seeing interviews with Matt Damon where he makes sure to mention that he doesn't spank his kids, lest anyone think otherwise and his stock in Hollywood plummets. By the way, I deliberately left out the one-smacker in "The Descendants", in which Damon's pal, George Clooney, smacks the bottom of his teenage daughter once for taking badly about her mother while she lays in a coma. Like a lot of modern scenes, you don't actually see his hand connect with her bottom. It's like modern directors think we won't notice that we've been ripped off. I was especially disappointed in Cronenberg for the completely faked scenes in "A Dangerous Method". I always thought him a tough and uncompromising filmmaker. A guy who can film a scene like the tragic ending in "The Fly" is too scared to show an actual spanking in one of his films. Maybe he has mellowed with age. At any rate, modern tastes will dictate what kinds of movies will get made. So even when Hollywood does give us a spanking scene, expect it to be within the context of modern times--either darkly vicious, leeringly sexual, or completely fake.

Very interesting overview of modern spanking scenes in the mainstream. I have to admit, the Weeds shot, with Mary Louise Parker is my favorite. Mainly I love in r/l, otk play. Secondly, that look after the scene on her face is priceless.

Yeah, Rich, she had an "I can't believe he just did that!" I would have to say it's my favorite, too and I have never seen the show LOL.