In my post yesterday, I related a story about the last time my father spanked me. My post was actually about the situation between Lindsay Lohan and Jerry Lewis. Apparently, the comedy legend thinks that Ms. Lohan could benefit from a good spanking. I told the story to sort of demonstrate the differences between the home I grew up in vs. the way she was raised. First of all, I was raised in the 60's and 70's. It was a vastly different time. Fathers still had final authority in their homes. Jimmy Carter was President. The Bee Gees occupied the top five positions on the American Top Forty. I was 17 that spring of 1978. I had just attended my Junior Prom. You might think I was a little old for a spanking. You might be right about that. However, my dad didn't think so. He was a Marine (I don't say ex-Marine because, as Gibbs often points out on "NCIS", there's no such thing) and he felt perfectly justified in expecting his kids to obey him. Up until my junior year, I had. I had been a perfect kid--and A-B student. 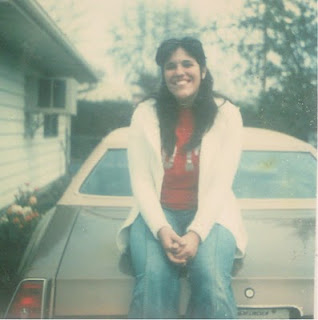 Don't let the innocent smile fool you. I was in the middle of a big time rebellious streak. I had let my grade in History (a required course) fall to a low C because I hated the teacher. That had never been a problem before. I was listening to KISS music, which really worried my parents. I was also beginning to drink and smoke pot at this time. However, my parents saw this for what it was--my attempt to show them that I was going to make my own decisions from now on. They didn't sit around wringing their hands and wondering what they had done wrong. My dad was very no-nonsense about the whole thing. He told me "You'll either snap out of it or get tired of standing up all the time." I was determined to tough him out and he was just as determined to reign me in. To do this, he used his favorite weapon, the leather belt from his Marine Corps uniform. Here's a pic of my mother and dad when he was on leave. Yes, that's THE belt he's wearing. 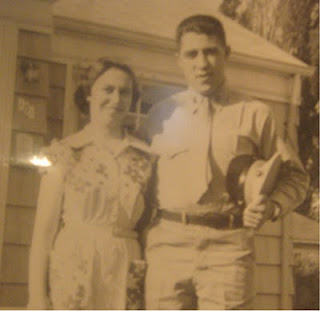 Even though I despised being disciplined by him, I knew he did everything out of love for us. He would have walked through fire for us and protected us with his life if he had to. Next to my mother, we were the most important things in his life. He made sure that we knew we were loved. He would never refuse to hug us or let us sit on his lap. Some of my happiest memories of him was sitting on his lap after I had just gotten out of the tub. I would have wet hair and my pajamas on and I would sit close to him, him teasing me about my freckles. He would always start to count them and make a great show of losing count. God, I loved that man.

I feel sorry for Lindsay Lohan, who recently sent a letter to her father via her lawyer. It was a cease and desist letter telling him to stop trying to contact her. That's the saddest thing I can think of; for a girl to hate her father so much. If he had disciplined her when she was young, if he had established his authority in his home (in a loving way and not as a tyrant), she would have felt that sense of security that I had growing up. All the acting out and crying for attention would never have happened. I wouldn't trade places with her for anything.

Wowser... awesome blog... a bit of bloodletting.. spilling your guts out on paper and opening up..

My Dad was military. Sadly, all he knew how to do WAS bark orders.. never knew how to love.. never knew the power of a hug. Oh he might pat you on the back..but it was no pat.. it was a WHAP WHAP! His idea of showing love was making sure once a year at Christmas.. the presents flowed out from under the tree to the door of the room. That's how he made up for not hugging or a kind word. I've had traded all those presents for a conversation that wasn't a lecture.. (sighs)