Most of the people who know me (even those who don't know me well) know that I'm a die hard St. Louis Cardinal fan. I've been a fan for as long as I can remember. My dad packed us up and took us to our first game in the summer of 1964. Cigi and I were three years old. Can you imagine driving for five hours with twin three year olds? My mother was at home with my older sister and brother, both of whom were down with something; don't ask me what. The game was against the Los Angeles Dodgers and was held at the old Sportsman's Park. 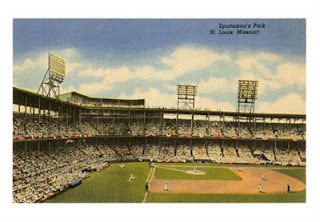 Then, as now, baseball managers liked to set the rotation so that their best guy was pitching when the other team's best guy was pitching. The Cardinals had their ace on the mound, the imposing and intimidating Bob Gibson. The Dodgers started with Sandy Koufax, who was maybe the best left handed pitcher of his time (or any time). Unfortunately, I have no conscious memory of this game. It's enough for me to know that I stood in the same ballpark with such greatness. The Cardinals went on to win the World Series that year, beating the Yankees. Cardinal broadcaster, Mike Shannon, still lists his home run off of Whitey Ford (the Chairman of the Board) as one of the highlights of his career. After attending my first game, I was hooked. My dad patiently taught me the rules and also how to keep score. Back then, very few games were on television. You mostly heard games on the radio. It's one of my sweetest memories; sitting at the table eating ice cream while a game played on the radio and my dad cleaned his golf clubs. I developed a lifelong love of Cardinal baseball and their great players and traditions. Now don't panic. Among all this baseball talk, I will get to the spanking portion of this entry, I promise.
Over the years, I began to investigate my spanking kink. Oh not actively, of course. I was still too young for that. But I began to have spanking fantasies about some of the players, all of whom were older than I was back then. One of my first was Tommy Herr, the second baseman for the 1982 World Series champions. Tommy was just a doll in my eyes and had a stern sort of countenance that I found very exciting. When the Cardinals won the World Series, Tommy was a 27-year-old cutie. His position was second base and he played it to the hilt. I can still remember the post game footage of that World Series: there was Tommy (whom my sisters and I had given the nickname "Sweet Cheeks") waving his jersey and with his glove tucked into the waistband of his pants. 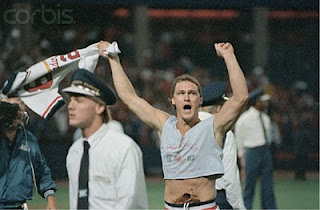 I kind of remember thinking it was odd that I didn't imagine what it would be like to make love to him. I thought about what it would be like to be spanked my him. At the time, I was trying to get my boyfriend to spank me and he refused. Oh, Tommy, where are you now?
The years progressed and my spanking fantasies continued unabated. Even though the players were now my age and even a little younger, I still thought about it. Oh don't get me wrong. I still cared if they won or not. I was still glued to my television (when they were on) or my radio (when they weren't). For some reason, over the years, my spanking fantasies have been confined to pitchers. I think it's probably because most pitchers these days are big guys and I have a thing for tall guys--mostly because they have nice laps. The Cardinals always seemed to have their share of big, strong pitchers. I had spanking fantasies about another Cardinal pitcher later, in the late 90's. His name was Matt Morris and I once saw a picture of him with a Space Ghost T-shirt on that said "Don't Force Me To Use The Spank-Ray" on it. 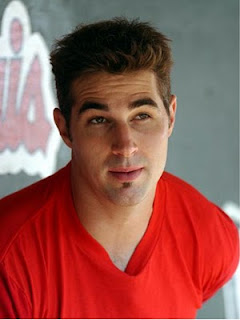 Matt, or Matty Mo as he was better known to fans, might just be one of us. Who else but a spanko would wear a T-shirt like that? I mentioned in my "Celebrating Life" entry that my nurses knew what the "whole house looked like". The first person I heard use that phrase was Matty. He was being interviewed on TV and he was going to be flying back to St. Louis for shoulder surgery the next day and he was asked about it. Matty was one that I thought for sure would probably spank a girl. He stayed with the Cardinals for six years until he was traded to Pittsburgh. It was one of the saddest days of my life when he was traded. I knew it was time to concentrate on someone else now. I found him pretty quickly, but not in a pitcher. My next "spanking fantasy guy" was a catcher named Mike Matheny (another guy with MM initials...hmmmm). Mike had a reputation for being tough and no-nonsense. He didn't coddle pitchers like many catchers do. He wasn't the type of catcher to spend a lot of time visiting the mound either. His specialty was throwing out anyone incautious enough to try to steal a base off him. 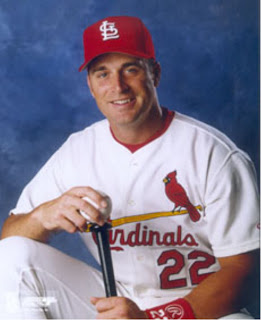 When he caught Matty Mo, he sometimes had to slow him down because he liked to pitch fast; just get the ball back and throw the next pitch. Sometimes, he wouldn't even wait for the sign. He would throw. And then Mike would peel his mask off and glare at him. I actually got to meet Mike in 2004 when a spanko friend and I attended a game in St. Louis. It was September and the Cardinals had a chance to clinch the division that day. I'd spent the previous night (it was an afternoon game) being tawsed by the guy I'd come with. Anyway, we got there way early and sat and watched batting practice. So many people were there, already cheering and chanting loudly, that they decided to open the wagon gate (the door to the bullpen) and let us out on the warning track (the dirt area that lets an outfielder know that he's about run out of real estate and hit the wall) to meet the players. The pitchers stayed in the dug out but most of the other players came out to meet us. Now Mike is a Christian, a quiet unassuming guy who would rather talk about his wife, Kristin and their kids than about his own accomplishments. Anyway, he put his hand out for me to shake and I was awestruck. He had the hardest hand I've ever felt. Thus, a spanking fantasy took hold. After the Division Series, Mike got a hunting knife as a gift and wasted no time in slicing his palm open, so we didn't have him for the Playoffs or the World Series. That put a series of events into motion and the Cardinals didn't resign him. Again, I was heart broken to see him go off to San Fransisco to finish his career.
The following year, the Cardinals signed a left-handed pitcher who had previously played for the Oakland Athletics. Cigi told me he was a "babe" and showed me a pitcher of him. I never doubted her again once I got a glimpse of the oh-so-hot Mark Mulder (again with the Double M's). 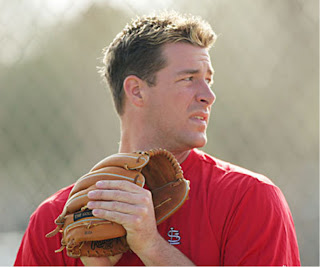 Now I know it's hard to tell from this picture, but trust me, Mark was a dyed-in-the-wool babe. The real deal. At 6'9" he was one of the tallest players in the game. Like most left handed pitchers, Mark was a flake. He had the quirky personality that most lefties have. My fantasies about him started when I saw him scold a female reporter for asking a question he felt was out of bounds (because it didn't happen on the baseball diamond). Oh my...hello, Mark. Because of the way he pitched, line drives often came right back at him. He once took a line drive off the bat of one of the National League's hardest hitters right in the ass and later, jokingly gave his post game interview standing up. I still have that game on tape and that hit had to have stung. Mark was such a hunk that he sometimes did some modeling during the off-season. Unfortunately, Mark didn't last too long. He was often injured and the last one ended his career. Oh, I was sorry to see him go. He fed a lot of my spanking fantasies while he was in St. Louis.
With the departure of Mark Mulder, I soon found another pitcher to concentrate on. It was Chris Carpenter, the Cardinals' Cy Young winning pitcher. I've described him in another post as a man of few words. He just has this special quality that thrills me. Last month, he got suspended for two games for participating in a bench clearing brawl. He plays to win and is a gritty competitor. However, he cleans up nice. 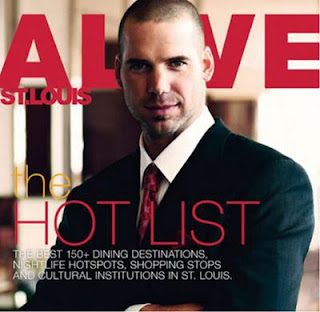 Mike Matheny also caught Chris in 2004. When those two worked together, my little spanko brain worked overtime. Chris another big, strong pitcher, one of many the Cardinals have had over the years. However, Carp is special. He's one of the most dominant right handers in the game. Even though he's now 35, his skills haven't diminished noticeably. It might take him longer to warm up and he might have to exercise more in order to keep in shape, but then who doesn't? I know that Chris can't pitch forever. I will have to find someone else to fantasize about. Most of the guys who play now are young enough to be my nephew (and some are young enough to be my son). I wonder if I will ever close the book on my spanking fantasies that involve baseball? There is one guy that might fit the bill. He's an outfielder and pretty hunky. 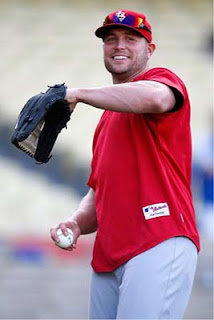 Matt Holliday came to the Cardinals last year at the trade deadline. I was attracted to him from the very beginning. Look how small that baseball looks in his hand. He's a genial guy and usually has a smile on his face. Plus look at those thighs. It looks like he has a very sturdy lap.
I guess time will tell if I continue to fantasize about Cardinal players. I've done it for so long that I don't know if I could stop, no matter how young the players get. That's the fun of fantasy.

I read and meditate on the Scriptures daily, thank you so much for the spam.