Help! Looking For A Still!

You know, having been interested in spanking (the M/f variety at least) as long as I can remember, I would've thought I'd seen every spanking still ever produced from a movie or TV show. But, alas, it appears I've missed one. What makes this whole thing frustrating and, I'll admit, somewhat embarrassing is the fact that this still is from a favorite show of mine. Because I had an older sister who was in love with these guys, she was glued to the TV every Tuesday and then later when it moved to Fridays. It ran from 1964 to 1968 and starred two very attractive men as spies for an international peace-keeping organization. Give up? Here's a hint: 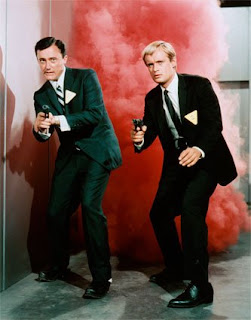 These guys were the coolest thing on TV in those days. There was Robert Vaughn as the suave, deboinare Nepoleon Solo and David McCallum as the cool, calm Russian Illya Kuryakin. Now, of course, some of the plots were silly and contrived. And we were asked to believe that a Scottish actor could play a Russian secret agent believably. But they had the neatest gadgets and let's face it there's just something about the way men dressed in those days. The whole package was just cool with a capital C.

Now the reason I'm going on about The Man From U.N.C.L.E. is because there was a near spanking on that show that I just discovered recently. I admit to being a fan of the show and have seen it in syndication on several channels over the years. But I haven't seen every single episode. The episode in question was the third season opener and was called "The Her Master's Voice Affair". Yes, for those of you who remember, the word "affair" was in the title of every episode. Probably because the word is faintly British and in the mid-'60's anything British was bound to sell. I won't trouble you too much with the plot but it involves our heroes going to a girl's school on Long Island (or was it Rhode Island? I forget...) where young people are being trained to get important information from their scientist parents and pass them on to the Bad Guys. Illya is given the assignment of acting as body guard and tutor to a rather difficult young lady. The stuff of fantasy, right? Well, since I haven't seen the episode, I can't say what precedes the aborted spanking on this show. I'm told Illya has the young lady over his knee and is about to put palm to bottom when his communicator goes off. Now this was a plot contrivance that was commonly used when someone needed to be saved by the bell. And by all accounts, she needed saving badly.

I'm looking for a clip or still from this episode. Gwen, if you read this, maybe you can put your mavening powers to work and find it for me. I would be eternally grateful. It just galls me that there's something out there from a TV show (and one of my all-time favorites) that I haven't seen. At least, I don't remember seeing it. After all, I was five years old at the time. If anyone can dig this up for me, please let me know by leaving a comment here. Thanks!

Hi Cheryl, when I was a kid this was one of my favorite shows but since I was 6 when it started I don't remember too much detail, only that like you say, they were two cool dudes. I'm pretty sure I didn't see the spanking episode because that would have definitely stuck with me. I hope someone does turn it up.

Michael, I was hoping Gwen could help me. You know, if anyone could find it, she could :)

I think I would've remembered this particular episode, too, but I was very young and since I got spanked all the time as a kid, I must have thought it was no big deal, although the girl was probably college age and I may have thought she was a bit big for a spanking.
However, I still want to see a still. I know you can buy the entire series on DVD but I just can't manage that right now.

I remember the scene vividly. Kuryakin was babysitting a spoiled Asian girl and she was trying to seduce him. I mean she was all over him.

He warns her, "If you don't stop it right now I'm going to give you a very good spanking. What if someone walked in right now?"

She replies cheekily, "I'd just tell them you were attacking me!"

He declares, "That does it!"

So saying, Illya flips the little brat over his lap and has his hand raised high over her skin tight breeches when the familiar sound of his communicator interrupts the proceedings, to my everlasting disappointment....

Cheryl--I watched the Man From U.N.C.L.E. every week it was on. I remember a wonderful Mad Magazine take off. But I don't recall the spanking (or near-spanking) scene at all. Nor have I ever seen a still or a screen capture of it. Hopefully, someone will turn one up. I'd love to see it.
And Happy Valentine's Day to you!

Hey, Lash, thanks a million for the description! I would almost bet that a threat preceded the action :)

Now I really DO wish I had a clip of it!

Dr. Ken, I had forgotten that one, too. But there was a description on another website and the person knew the name of the episode so I was sure he hadn't made it up. Hopefully, a still will be forthcoming.

I watched it faithfully, too. The spanking episode I remember involved Illya and an evil foreign lady. Illya was tied up and she said something to the effect of "We will beat you." Then we saw him afterward, sweaty and rumpled.

I fantasized about Illya being spanked (not beaten) for YEARS and that's why I became so passionate about the show. My girlfriend and I used to pretend we were the two secret agents. I was Illya, she was Solo. (we were in high school at the time.)

Not quite what you're looking for (I'm after it too!) but try here: http://www.davidmccallumfansonline.com/voice.htm

Scroll down to the UNCLE quotes and you can download the mp3 file of Illya saying "I will give you a good spanking in a mo(ment)" (it cuts off - most annoying!)

Thanks for the video link! Hearing it isn't the same as seeing it, but it's the next best thing! :)