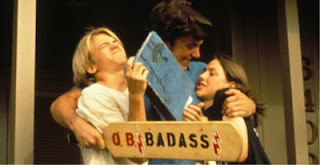 While reading Devlin O'Neil's blog tonight, Gwen touched a nerve with me. She was talking about a "near miss" she had with one of her older brother's friends. Luckily (or is that unluckily) she escaped the situation unscathed and unspanked. I posted a response to her post in which I briefly described a similar close call at a keg party my freshman year. It was autumn, 1975 and I was a 14-year-old freshman at Central High School. In those days, there were definite "class distinctions". Seniors simply did not mix with freshmen. They didn't even talk to them unless it was necessary (like coming into their algebra class and handing them a call slip from the dean...but that's another story). Anyway, my friends and I found out about this party totally by accident. My friend, whom I'll call Beth, had a nasty habit of listening in on her big sister's telephone conversations. Her sister was a senior and dating a guy on the wrestling team. So Beth, Cigi and I and a few other braves souls decided that we would infiltrate this bastion of seniorship and attend. It was a brisk fall evening and there were a lot of people there. This took place at a very well known state park here in Illinois and there was a pretty good crowd when we arrived. The bonfire had already been lit. Just beyond the first bank of picnic tables, the kegs were set up along with stacks of plastic cups. Some people brought blankets and camp stools. The air was thick with smoke and loud music.
Now, I could go on and on about this, but it's not the real reason for my post. All of this reminiscing has me thinking about that great '70's coming-of-age flick, "Dazed And Confused". The pic above is a still from the film and many movie fans will recognize Ben Affleck as the dude holding the rather menacing looking paddle. The film came out in 1993, very early in Mr. Affleck's career. The movie takes place on the last day of school, 1976. The incoming freshmen are hazed unmercifully by the seniors. I loved this film but all of the paddling is male on male. One of the cutest scenes in the movie involves the older sister of Mitch (the kid with the longer hair in the pic) going to one of the seniors and asking him to take it easy on her little brother. Of course, the guy promises (and we are treated to slow motion shots of him wearing this poor kid out later in the film) and as she turns to walk away he gives her behind and playful but solid smack with the paddle he's holding. When she protests by squealing "Ouch!" her friend says "You know you love it."
Unless you were in high school in the '70's this film might not appeal to you. And as a "spanking film" of course, it fails. But it's easy to feel sorry for the poor freshman boys who seem to be getting "busted" at every turn.
And I have t0 say to anyone who hasn't seen the film that the girls are even nastier than the boys when it comes to hazing the incoming class of freshman girls.
The soundtrack rocks even if some of the songs were old even in 1976. Still, all the expected groups are represented---KISS, Aerosmith, Peter Frampton, Ted Nugent, and The Runaways, among others.
This film is a pretty accurate representation of the era. There were no cellphones in 1976. There were no video games (a rather rousing game of foozeball is shown). There was no text messaging (thank God!). And if you wanted to sit up front in a car, you had to call "Shotgun!". I get a little misty eyed and sentimental when I view this film. Probably the previous generation felt the same way about "American Grafitti". For those of us who enjoy a good paddling scene, this one offers a few. Would I rather see Ben Affleck swing his mean paddle on a girl? Yes, I would. But, as with most things in life, you can't have everything. Still, for spanking fans, this one sort of fits the bill. For people who survived the '70's, you might find yourself smiling knowingly at similar incidences in your own teenage years.
Posted by Cheryl at 10:35 PM

Great movie, Cheryl!! You're right - I'd rather see Ben chasing a chickie with that paddle too but the omni-present threat throughout the entire movie is a rush, don't you think? ... Terrific post!

There were certainly a lot of paddles in it, Gwen!
It just had that whole '70's thing down pat.
Hugs,
Cheryl

I mean, uh, great post, Cheryl. Very well written piece indeed. Just sort of surprised to see myself posting a comment when I hadn't even read your bit yet - Gwendolyn!

Anyway, I do remember the 70s, but I was out of high school by then, and apparently missed any hazing of freshmen, either by going to school in the right (wrong?) place or doing so in the 60s. Still, I'll put this movie on my 'to see' list, and I appreciate your bringing it to my attention.

Just because I'm the great brat that I am...I just had to point out that I was born during your freshman year in high school!!!

This is my first visit to your blog, btw. I have enjoyed myself immensely!