Remember the night of the election in 2016? Remember as soon as the results were announced, the melting snowflake videos started going viral on Facebook and Twitter. That night, the fires and broken windows started and they've never really stopped. Trump, from the moment he was called as President, got the poison pens of every Democrat and Never-Trump pundit out there. He was called every vulgar name in the book and nothing was too nasty to say about him or his family. The supposed grown-ups in the House and Senate began talking about impeachment as soon as the election was over. Nineteen minutes after the election was over, The New York Post posted an article that mentioned impeachment. Nineteen minutes. The "not my President" movement started that night.
For the next four years, the Democrats and RINOs spent every waking moment bashing the President. Wherever they could hurt him, they did (even when it hurt American citizens). Who can forget late night "comedian" Bill Maher hoping that the Trump election would trigger a recession that would crash the economy. Can you imagine someone cheering for a recession just to hurt the President?
In May, New York's Shakespeare in the Park was held. It was a free performance in Central Park which ran for a month that summer. The play chosen was "Julius Caesar". But this was no classic depiction of the play. The play was modernized and Caesar bore a strange resemblance to the President. People sat in the stifling New York heat to get to Act III, where Caesar is stabbed to death by members of his Senate. 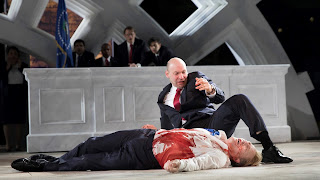 My ex-husband and I had always managed to stay friendly after our divorce in February 2017. But I always wanted to get back together with him, All it took was a visit to this spell casters website last December, because my dream was to start a new year with my husband, and live happily with him.. This spell caster requested a specific love spell for me and my husband, and I accepted it. And this powerful spell caster began to work his magic. And 48 hours after this spell caster worked for me, my husband called me back for us to be together again, and he was remorseful for all his wrong deeds. My spell is working because guess what: My “husband” is back and we are making preparations on how to go to court and withdraw our divorce papers ASAP. This is nothing short of a miracle. Thank you Dr Emu for your powerful spells. Words are not enough. here is his Email: emutemple@gmail.com or call/text him on his WhatsApp +2347012841542

He is also able to cast spell like 1: Lottery 2: Conceive 3: Breakup 4: Divorce 5: Cure for all kinds of diseases and viruses.