Author's Note: Today's entry deals with sex. Sometimes, the language will get a bit graphic in nature. If this subject offends you, please don't read any further.

Today on Fetlife, a woman was kicked out of a monogamy  group because she and her husband attend spanking parties and play with other people. The group owner said that the woman didn't fit the criteria for his group and booted her out. She  brought her dilemma to a spanking group and trouble ensued. Then the group owner of the monogamy group came into the spanking group to defend himself and his group, which he felt had been maligned. Now as a group owner myself, I usually don't allow people to come into one of my groups and complain about another one. However, this spanking group is very large and almost all of the spankos I know belong to it. Of course, this guy got his hat handed to him by a bunch of spankos who disagreed completely with him and with his definition of monogamy.

So I got to thinking...is spanking sex in the practical sense of the word? After all, monogamy is by its very nature designed around sex and the belief in being with only one person sexually. I consider myself monogamous because I don't have sex outside of a committed relationship. When I'm not in a relationship, I choose to be celibate. I refrain from actual sex, but that doesn't mean that other sexual activities aren't taking place. I understand that for many, many people spanking is definitely a sexual act. For many others, it's a kind of foreplay that leads directly to sex. But where do people like me fit in? I'm totally aware that spanking has a sexual component to it (you're touching someone's bare bottom, for Pete's sake) but does that make it sex? I know for me I don't get sexual satisfaction from spanking. I can "go there" if I give myself permission, but I rarely do so usually nothing happens. My enjoyment come almost completely from the pain of the spanking. And by "enjoyment" I don't mean I get aroused or anything like that. Not usually, anyway. As I said, if I give myself permission to let that happen, then of course I can get as turned on as the next woman. I'm not frigid, for crying out loud. I happen to enjoy just getting spanked, with no extras. Most of the men who spank me are perfectly OK with this arrangement. So if I were to be in a committed relationship, and we both agreed that it would be acceptable for us to play with others, I would not feel like I was cheating on him. This group leader who came into the spanking group was all over the place talking about what the "dictionary definition of monogamy is". Well, gee, the dictionary talks about married couples. Can I not be monogamous because I'm not married? Is there some other word to describe unmarried women wh0 are only into being with one man sexually? When I allow a man to bare my bottom and spank me, am I having sex with him? 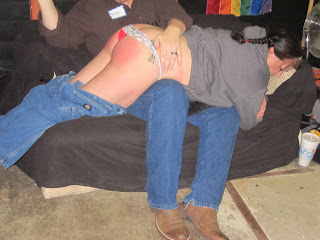 According to the man who runs that Fetlife monogamy group, this is a couple having sex. My panties aren't even down and yet we're supposedly engaging in an act that is only for married couples. And yes, note the man's wedding ring. He's married and no, I'm not his wife. His hands are nowhere close to inappropriate areas. His wife was taking the pictures, standing only a few feet away and she had no problem with anything we were doing.

So is monogamy whatever two people decide it is? Or am I deceiving myself and I'm actually not monogamous because not only do I get spanked by a lot of different men, many of the men who spank me are married to other women. Am I an adulteress? Have I committed adultery because I allow another woman's husband to spank me? Whose standards do I go by? The community at large? The kink community? My church? Who's to say what is right? That man who runs that monogamy group felt he had the right to define what it means for the whole world (even though he vehemently denied it). So according to his definition, I'm a scarlet woman. I'm more modest and chaste than a lot of women I know in the spanking scene. And I'm downright prudish if you ask the BDSM community. But according to that guy and his narrow definition, I'm a whore. Oh well, so be it, I guess. I just know that I'm having fun being who I am and living by the standards I've chosen for myself. I guess ultimately, we all decide for ourselves if spanking is actually sex or not.
Posted by Cheryl at 5:29 PM