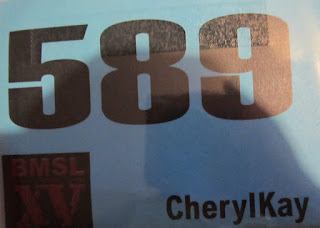 The big Beat Me In St. Louis event is now history. It was my first time attending that particular event and my first time venturing out of my Chicago/spanking comfort zone. I saw some things that opened my eyes and also had some exhilarating play.

The drive down was perfect. We couldn't have asked for better weather. We drove part of the way there with the top down it was so gorgeous. My companions were experienced when it came to this event (nowhere did I ever see it referred to as a "party") and I couldn't hide my nerves from them. My concerns were numerous. It was my first BDSM event. I'm a spanko. I don't consider myself in the BDSM scene at all and this weekend only widened the chasm as far as I'm concerned. I was afraid of what I might witness and afraid of what I might be asked to do. Since my travel companions weren't spankos, there was no real discussion about he differences. They will be attending their first spanking party this summer when they attend the Crimson Moon July party so the shoe will be on the other foot. I was also afraid that I wouldn't be able to find anyone willing to just spank me (a fear that didn't turn out to be unfounded). I knew enough about hardcore BDSMers to know that spanking to them is a warm up to other things; a side order to go with the main order. It's not the whole meal for them like it is me. I met only two people that I had met previously--WhypDancer from Canes4Pain and the violet wand guy (whose name escapes me) that I met at a previous CM party). Everyone else, save the folks I was attending with, was a complete stranger to me. 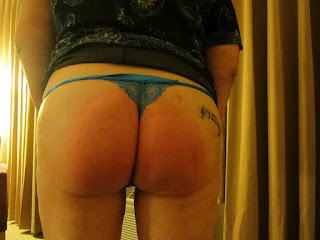 It was getting late and I was tired. P had been up since 4 am. But they weren't ready to turn in just yet. P had become a bit frightened with how hard I was being spanked, even though I made it clear that I was a hard player. She was obviously distressed and I must have apologized to her a dozen times. They all went back downstairs and I called it a night.

I was so thrilled to have finally found you at this party :)) Will had a blast spanking you.