I was saddened earlier this week to learn of the death of Parnell Roberts. For those of you who are too young (or don't remember), he played Adam, the oldest Cartwright son on "Bonanza" from 1959 to 1965. He left the show to pursue movies and make a return to the stage (he won a Tony in 1955 according to the press release). He also starred as Trapper John McIntyre on "Trapper John, MD" from 1979 to 1986. The show was a spin-off of "MASH" and followed the Trapper John character after his return from Korea.


Now the reason I mourn Mr. Roberts isn't just because he was a fine actor and a gentleman. But he gave us one of the greatest spanking scenes ever filmed. In an episode called "Woman Of Fire", he gave a memorable spanking to Joan Hackett. 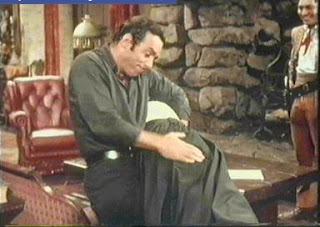 Adam was normally a pretty easy-going guy (unless, of course, there were rustlers or other bad guys to tangle with) but this woman got on his nerves. Essentially, the plot revolves around this woman not wanting to marry the man her father has chosen for her. Her younger sister, meanwhile, has two suitors vying for her affections. If any of this sounds familiar, it's because it closely resembles "The Taming Of The Shrew" in plot. Her father, a friend of Ben Cartwright's, is wanting to marry his daughter to a respectable gentleman but her temperament makes her impossible to live with. She's feisty and opinionated and likes things done her way. The scene that leads up to the spanking is a little sketchy but it involves her attempting to brain someone (either one of her sister's boyfriends or one of the other Cartwright brothers, not too sure as I haven't seen the episode for some time) with Adam's guitar. He takes it away from her and, without a word, proceeds to spank her bottom with gusto. I think I was about 12 the first time I saw this episode and it made an indelible impression on me. I thought the spanking was pretty hard but seeing it later as an adult, it wasn't all that severe. However, the placement of the spanks was wonderful. No mishits here for the professional stage actor. For me, one of the hallmarks of a great movie spanking is whether or not the man giving the spanking looks like he knows how to give one. He sure did. Of course, being a stage actor, he may have just been very good at taking direction. I'm not sure if he had any real life experience or not. The scene is sure good though, both from an entertainment standpoint (who doesn't like to see a brat get theirs?) and also from the perspective of someone like me, for whom spanking is endlessly fascinating.

Roberts was the last surviving original cast member of "Bonanza". He was 81 years old. Rest in peace, old friend.

Sorry to hear of his passing. he was the last living member of the original cast. I remember that episode well. He was really hamming it up with a lot of Taming of the Shrew guotes. I often wonder what happens to tv and movie stars when they are no longer in the limelight.I had not seen him in anything since The night train to Katmandu. I often suspect they sell real estate or something of perhaps live off investments. Thank you for the update.