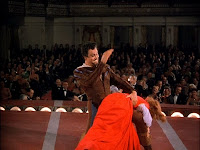 Many of us who are into being spanked can remember the days before we made the decision to act on the things that, before this, had been simple fantasy for us. For a lot of us, movies and TV were a good outlet for living out those fantasies.
In the days before "The Feminine Mystique" and Womens' Lib, women were often subjected to spankings in the movies. The not-too-subtle sexism of the era drove many of the situations in these films. If that silly little gal would just get it through her head that I'm a man and I run the show here, things would just be so much easier. It was usually women who insisted on doing things their own way that ended up OTK in these old movies. There always seemed to be something about the woman that needed to be changed and then she would be "acceptable" as a companion or girlfriend. Despite some misgivings about the situations that occur in these films, when I was a kid, these movies were what was available.
The picture at the top of this post is from what I consider the "Daddy" of all spanking films. This film is so famous that if you asked a hundred people who weren't spankos to name a movie with a spanking scene in it, most would probably name "Kiss Me Kate". The spanking scene is so famous, that it often appears on posters and playbills for productions ranging from motion pictures to off-Broadway plays to high school musicals. But let's be clear about one thing. I consider this the most famous spanking scene in a main stream film, but not the best. This blog entry isn't about what I think the best spanking scene is. I'm just talking about the most famous.
Let's face it. The scene is cute. The beautiful, sweet-voiced Kathryn Grayson poking, kicking and slapping the hapless Howard Keel until he threatens to give her "the paddling of her life" right onstage. The practically dares him to. What choice does he have but to avenge his wounded pride (not to mention ribs)? Most of the people who know me well know how much I hate seeing anyone humiliated, and make no mistake...she IS humiliated. The audience gets more than it bargained for and laugh it up until the curtain drops. The scene is cute, as I said. Miss Grayson fits adorably over Keel's knee and appropriately overreacts to the smacks (which I sincerely doubt she felt through the heavy dress she was wearing). Ordinarily, I'm not a big fan of MGM musicals, but "Kiss Me Kate" has enough nice moments apart from the spanking scene to make me actually sit and watch the whole thing. At the end of the film, the fiery Miss Vanessi is appropriately contrite and encourages her fellow females to "meekly put your hand beneath your lord and husband's foot (not my favorite part of the film)".
Something about this film stands the test of time. The bickering exes, the Cole Porter score, the costumes, all come together to create a film experience that has become, dare I say it?, iconic?
Well, it is to spankos anyway.
Posted by Cheryl at 12:24 PM

I saw Howard Keel and Katherine grayson together on a talk show many years ago it might have been Carson. They sang together and she goofed up and he gave her a mock kick to the butt.
during the interview portion she related that "Kiss Me Kate had a sanking scene and I put a book in my pants before howard spanked me because he warned me he was gonna really do it cause i had been teasing him."