There's Something About Chris

Everyone who knows me knows that, during the summer, almost all activity stops when there's a Cardinal game on. Everything, that is, except spanking. I have been spanked watching baseball quite a few times; one of which was while watching my Cardinals win the World Series in 2006. I was at a spanking party in Chicago and, although it was a momentous occasion (the last time we'd managed a world championship, Ronald Reagan was in the White House and I wasn't yet old enough to drink), I wouldn't let the man stop spanking me. When the last out was made, I jumped off his lap and jumped up and down with joy.

Now the All-Star game is next week and is being held in Busch Stadium, home of my beloved Cardinals. Am I excited? Heck, yeah, I'm excited. The All-Star Break is considered the half-way point in the season and traditional wisdom has it that whoever is in first place at the All-Star Break usually wins the division. Happily, my Cards are perched in first place in National League Central. All is right in Cardinal Nation. Which brings me to the subject of tonight's missive--- 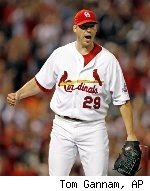 The man in the photo is Chris Carpenter, the right-handed ace of the pitching staff. In 2006, he won the National League Cy Young Award with a record of 22-5. Not too shabby. Many say he's on his way to a second award. However, when the man is pitching, I'm not thinking about that. What AM I thinking of, you ask? I'm thinking about the fact that, to my spanko-trained eye, it looks like Chris could give a hell of a spanking. Physically, he's an imposing sight. He's 6'6" and usually weighs around 230 pounds. He's my kind of spanker---tall, solidly built and good with his hands. He has a commanding presence on the mound, too and somewhat of a mean streak. More traits of a good spanker. So while all the writers and scouts and vanilla sports fans talk about his cut fastball (his best pitch) I'm usually thinking about nice it would be to be across his rather ample lap. Spanking and Cardinal baseball are my two favorite things so it's only natural that I try to find ways to combine the two. Granted, Chris would never be mistaken for Brad Pitt (as evidenced by the pic) but there's just something rugged and unmistakably masculine about most baseball players, especially Carp (as he's affectionately known by us fans). He's one of those that doesn't have a tattoo (that I can see anyway) and his ears and neck aren't loaded down with jewelry. His pitching motion contains no wasted motion and when he speaks to the press, no wasted words either. He's just a guy who goes out and does what he gets paid to do (when he's not on the DL, that is). And, as a spanking girl, that's very appealing to me. I can imagine how a scene with him might go. He likes to laugh and have a good time, but when it comes time to get to work, he does it...cooly and efficiently. His job is to make opposing batters look weak and helpless and, for the most part, he accomplishes that. However, that's not what really draws me to him. Now, don't get me wrong. I love it when he keeps those batters off-balance and guessing. I would imagine that, during a spanking scene, he would be just as capable of doing the same thing to any girl fortunate enough to find herself on the receiving end. But, alas, this is fantasy. The reality is that he would probably find a woman who loved being spanked scandalous. But then, he's probably vanilla and that's just what I would expect. Oh, but I can sure dream!

Chris Carpenter would make a good spanker. Just wouldn't want the guy to hurt his shoulder. Could you imagine the injury report... lol.

Oh, cute idea! I never thought of this one..I used to get spanked while watching football. It was all in fun (hard spanking until our team got a first down!).

I think combining spanking with sports is just a very cool thing to do. And, yes, I agree that the accident report would be humerous should Carp ever hurt his shoulder (or his elbow) spanking someone.

By the way, can I add a link to your blog? I've always meant to, just have been lazy.