Walk On The Wild Side

It all started innocently enough. A few months ago, I posted my first nude shot on my Fetlife profile. It was nothing to get excited about. It was taken at a tasteful angel that left the things I didn't want to show covered. Some called this cheating, but I was proud of my courage in posting something I wasn't completely comfortable doing. If I was going to post a nude photo, I was going to do it on my terms. I don't have the most beautiful body in existence. Not everyone is turned on by folds of fat, stretch marks and cellulite. So I have to be creative about how I pose and what angle the photo is taken from. That first photo started me with being more comfortable about showing my body naked. I still don't show myself from the front, but I've gotten braver when it comes to posting photos. Recently, I've become interested in the titillating possibilities of photographing myself bare bottom outdoors. Now don't misunderstand me here. I'm not one of those nudists who thinks everyone should just walk around with no clothes on. And I'm not one of those people who takes the risk hoping they will be seen by some vanilla person. I know quite a few people who love nothing more than shocking people. I'm not into that. I guess it's the threat of being seen that I find exciting. If I was actually caught, I would probably be mortified. I live in a small town and if I was to get caught with my pants down in public, I'm sure the people I work with would find out about it. My first pants free outdoor shots were taken on my deck. The house behind us, which I always thought was empty, has been sold recently so now there are neighbors on all three sides. I have to be very careful. The photos are taken on the sly and there's no chance for re-takes. I have to watch for neighbors, the mailman and also for people living in my own house. I never thought I would get any braver than this. But yesterday, someone dared me to take one out in a public spot. Now you have to know this about me before I go on. I have never been able to resist a dare. No matter how dangerous or how stupid, I have to do it. However, I draw the line that things that destroy property or inure someone else. Anyway, we have a bike path near our house and I picked this spot for my photo. The part I usually walk on runs adjacent to the highway. It was a gorgeous day--sunny and about 68 degrees--and so there were going to be a lot of people on the path. So I chose the part of the path that went the other way, into a wooded area. Call me a coward but the other way would have more than likely gotten me caught with my pants down. As I walked along, I began to look for something to rest my camera on. But there was nothing; no picnic table, no garbage can, nothing. So I kept walking, smiling politely at the bikers who passed me. Then I saw it. Right before a bend in the path, I saw a sign of some sort with a nail sticking out of it. My camera has a little string that can go around your wrist which is supposed to keep you from dropping it. I hung the camera on the nail, steadied it as best I could, set the timer and walk a few steps ahead. I was getting a tremendous adrenalin rush from this. I pulled my pants down just far enough to bare my bottom, then made to pump my fists in the air, but the shutter opened before I could do that. I debated doing a re-take, but thought better of it. I quickly pulled my pants back up and checked the camera. The photo turned out pretty good, considering the breeze was probably moving the camera a bit and my hands look awkward. 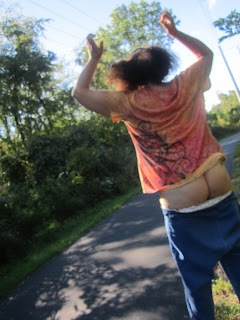 But all in all, this was a very cool experience. And it doesn't hurt that I'm getting $50 from the person who made the bet with me. Will I be doing more photos like this in the future? Maybe. Who can say? But to be bare bottom out in nature is an exhilarating experience. I have no plans to kiss discretion and common sense good-bye though. For right now, this is enough.

This is a jolly nice spanko blog with interesting posts. Keep up the good work! I'll drop by again.