This morning, being a lazy Saturday, I spent part of the morning trying to find stills for some of my favorite movie spanking scenes. Now just let me say for the record that I detest having to slog through all that porn just to see a still from "Professional Sweetheart" or "She Wrote The Book". Usually, for me, Saturdays are spent at work.But today was the exception so I thought I would see if there was anything new out there. I was surprised at how hard it is to find good, high quality stills or captures from classic spanking scenes. I used to love going to Arild's Movie Spanking List and mentally checking off the movies I'd seen. But these days, when you click a link to this site, there's a blind link that takes you to, that's right, a porn site. Of course, the "Cinema Swats" page is always good for perusing spanking scenes. But it hasn't changed much in the five or so years that I've been looking at it. The best site I've seen recently is the Spanking Facts and Research site, which as a very good movie spanking page. They list the movies alphabetically, so knowing the name of the movie you're looking for is a must. I've found some very good stills and captures here. Without further ado, I'll show you some.

Note: if any of the photos below are copywrited and you own it, please let me know so I can properly credit you.
First up, one of my all-time favorites; the spanking scene in "Blue Hawaii". Elvis spanks spoiled brat Jenny Maxwell for running off and scaring everyone. He finds her attempting to drown herself in the ocean and carries her ashore, where after some perfunctory scolding, he spanks her. 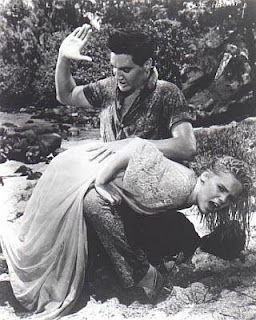 I'm not sure why the picture didn't post properly but this was the best I could do. This also looks more like a posed still than an actual scene from the film, but it does depict the action nicely. Ms. Maxwell was 19 at the time "Blue Hawaii" was made and sadly, was gunned down 20 years later with her husband outside their Beverly Hills condo during a botched robbery. If you go to Findagrave.com this photo is the one they have posted of her. Wikipedia's list of American murder victims also mentions the spanking in "Blue Hawaii". Ah well...I guess there are worse things to be remembered for.

Next up, the absolutely breathtaking Paulette Goddard is spanked by the elegant Ray Milland in "Reap The Wild Wind". She is in love with John Wayne's character in this epic and has been playing up to Milland's character in order to secure a captaincy for her boyfriend. Milland had intended to announce their engagement at that evening's party, however, he decides to spank her instead. 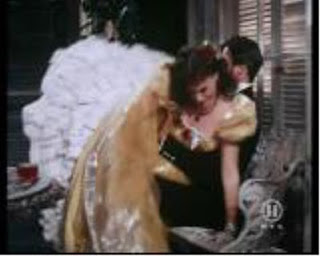 Next, another favorite scene, though the two actors are far from favorites. It's the spanking scene from "Captain Lightfoot". Rock Hudson spanks the daylights out of Barbara Rush (the actress who would later gain fame as Della Street, the paralegal on "Perry Mason"). Apparently, she's seeing a man the captain disapproves of and, because her father has asked him to look after her in his absence, feels obliged to let her know about his dislike over the man she's seeing. She argues with him over it and he takes her over his knee and spanks her hard for it. 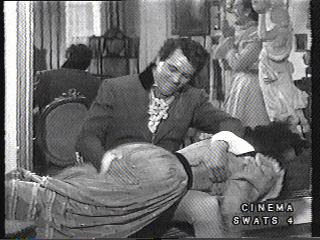 The next movie also has a very believable spanking scene. I admit that I haven't seen the whole movie, but the spanking scene is awesome. In "Bunker Bean", Owen Davis, Jr. spanks the haughty Louise Lattimer for daring to laugh at his attempts to order her around. Like the scene in "Captain Lightfoot", the spanking is preceded by a scene in which the male character (sufficiently bolstered by some Dutch courage he's sampled while reading a book on Napoleon) attempts to tell the female character who she can and cannot see socially. She laughs at him derisively and accuses him of being drunk. He tells her he thinks she needs a good spanking and then proceeds to give her one. 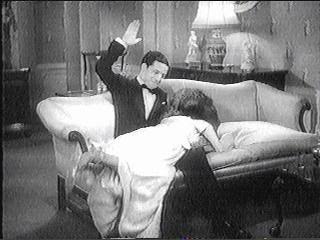 As I've said many times before, I feel the most important part of any good spanking scene is that the person giving the spanking (in my case, the male) should look like he knows how to give a spanking. We've all seen movies where the build up is excellent, the bratting superb and the spanking a huge disappointment because the spanker lacked technique. The movies I'm siting here today all have this quality---the spanker knows what he's doing (or at least looks like it!)
Up until now, all of the scenes I've included have been hand spankings. This one features a switching. I first saw "True Grit" in the theater with my dad when I was eight years old. Just a few months previously, John Wayne had won an Oscar for his portrayal of federal marshal Rooster Cogburn. In the early part of the film, Glen Campbell gives Kim Darby a whipping with a switch for not turning back as ordered. He simply grabs her off her horse, pulls a switch from a nearby shrub and goes to town. As an 8-year-old whose father sometimes used the switch, I remember cringing in my seat during this scene. 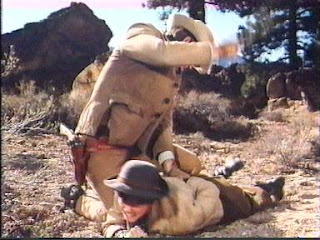 I'll post more scenes soon. Today, with it being a lazy Saturday and all, I just don't feel like doing any more work. So spank me!
Posted by Cheryl at 9:05 AM

Nice blog you have here Lady! I'll link you at MarQe's Study