I've been a wrestling fan for many years now. Since before the days when it was called "sports entertainment". I'm talking about the mid-70's when the AWA (out of Minnesota) used to hold a monthly card at one of our local high schools. The AWA was run by former NCAA champion Verne Gagne. His son, Greg Gagne and his tag team partner, Jim Brunzell, were my first crushes. They were aerial artists of the highest order; meaning you would see a lot of drop kicks from them. Greg would use his father's signature move, The Gagne Sleeper, on opponents who had been sufficiently softened up. The guys were physical and knew how to get things done in the ring. But alas, there was never a spanking. Probably because there were no women around back then. At least, not in the AWA. That came later.

In 1981, the late David von Erich gave a quick, no nonsense spanking to Sunshine, the valet of his opponent, Jimmy Garvin. This happened in Texas in the old World Class promotion. After that, the floodgates opened. Women were getting spanked left and right it seemed. At least in the South they were. In November, 1989, after World Class had changed its name to USWA, Billy Joe Travis gave what was probably the first bare bottom spanking in wrestling history to Toni Adams, the then wife of Gentleman Chris Adams. At the time, Adams had a protege named Steve Williams, who would later change his name to Steve Austin and become one of the most popular wrestlers of all time. Billy Joe was a man ahead of his time. As far as I know, no unedited version of this spanking exists (except maybe in the safe at the home of the person who was the production manager). I've seen the edited version and it looks like it was a pretty good one. Billy Joe had taken the trouble to handcuff Toni's hubby to the ropes in order to keep in out of the way while he got his mitts on the gorgeous Toni. A few years later, after Toni and Chris had divorced and Toni had turned heel, Billy Joe's former tag team partner, Jeff Jarrett, spanked Toni himself while she was wearing a maid's outfit. Jeff also had a great reputation as a spanker. But the man who, in my opinion, stands head and shoulders above the rest in terms of spanking is Sandman. This guy has spanked every woman you can name (and a few you can't) in wrestling. 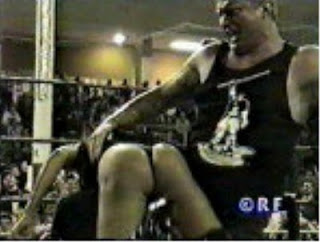 I've seen literally dozens of pictures of this guy spanking women. He must hold some kind of record. Now, when it comes to the other side of the coin, I don't think any woman has been spanked more than Francine has. The Queen Of Extreme has been over the knees of almost every wrestler in ECW history. 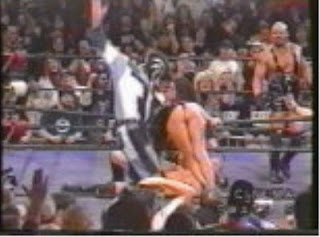 In this photo (and it's poor quality to boot) Rick Rude does the honors. But Francine got spanked a lot--usually for turning on her man and allowing him to be cold-cocked by his opponent and then strolling off on the arm of said opponent. This woman had no loyalty. Faithful ECW fans took to making up cheers about her.
Unfortunately, male on female spanking seems to have gone the way of two-out-of-three falls matches. It hardly exists anymore. Most of the spanking these days is girl on girl; mostly to titillate wrestling's major demographic, males aged 18 to 34. It's really too bad that this happened. Wrestling is more boring for this change. Where once we were treated to Diamond Dallas Page spanking his wife, Kim, on national television, now we're more likely to get two women who look more like they belong in porn films than in a wrestling ring spanking each other. Sorry, but that just does nothing for me.
I've lost interest in wrestling these days. My Monday nights are no longer taken up with Raw is War or Smackdown. Gone are the days when The Rock and Stone Cold Steve Austin passed the title belt back and forth between them. My main disappointment was never getting to see the delightfully spankable Stephanie McMahon (the daughter of WWE head Vince McMahon) get spanked. It would have been awesome but, alas, it never happened. At least, not that I know of. If it has, would someone please let me know? I so miss those days.
Posted by Cheryl at 8:20 PM

Stephanie McMaHon received a spanking/strapping from Trish Stratus as Kurt Angle attempted to pull her out of the ring. Trish even pulled her pants down. It was beautiful indeed.

Yes, I know about that one. I saw it when it happened. Sadly, F/F does nothing for me. I wanted to see her spanked by one of her father's wrestlers, not another woman. There's too much of that in wrestling these days. I miss the old days when the men did the spanking.