My old buddy, Jerry, used to have a saying: "If we all liked the same thing, we'd all like Adam And The Ants". Truer words were never spoken.


All I know is I get another chance to indulge my love of both spanking and music.

For those of you who don't know or aren't old enough to remember Adam And The Ants, a little background is needed. Adam Ant (born Stuart Goddard) formed his group, The Ants, in the late 70's. They were famous for a couple of things. First, they were one of the few bands I'd seen (apart from the Alman Brothers and .38 Special) with two drummers. Secondly, they were what used to be called a "costume band", with outfits that were 18th century meets 80's New Wave. 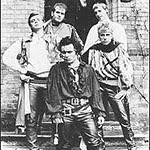 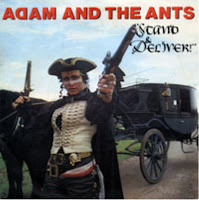 In those days, English bands had a habit of putting a song on the B-sides of their records that wasn't on the LP so it was a nice bonus. The song was called "Beat My Guest" and from the first line, I knew it was about spanking. Or, more accurately, beating.

Oh, this was interesting. I was 21 and in no way was I yelling to the world about my love of spanking. Not at that time. I played the song on headphones so my parents wouldn't hear it. Then I heard the refrain:

Be your dog, just don't flog.

Yes, and hear me plead, make me bleed."

I knew Adam must be into some pretty dark things. I began to buy up whatever I could get from this band. The fact that Adam, with his patrician features and high cheek bones, was pretty easy to look at made it all the better. I bought their two best knows albums, "Kings Of The Wild Frontier" and "Prince Charming". Then I was lucky enough to find their first LP, called "Dirk Wears White Socks" (a nod to British actor Dirk Bogarde). On that very first LP was a song called "Whip In My Valise". The entire song is about spanking, caning and whipping. My gosh, Adam even says the word! Although, the British use the word smacking and not spanking. Maybe he wanted to sound more American? Not too sure. I'd known for awhile that spanking existed in music. I'd heard "Bad Boys Get Spanked" from The Pretender's second LP. I was suitably scandalized. Didn't Chrissy know that boys DO the spanking, not get them? At least Madonna got it right with "Hanky Panky", about a woman's need to get spanked. But back then, hearing "Beat My Guest" for the first time, I was so shocked. Someone was actually singing about something I longed to do (although I didn't want to bleed, thank you). I suppose nowadays, it's much more accepted and mainstream to sing about being into spanking or BDSM. But back then, it was totally new, at least to me.

I'd be glad to hear of any songs my readers might want to discuss on this topic. Not time to write more unfortunately. Have a spanking good day, everyone.