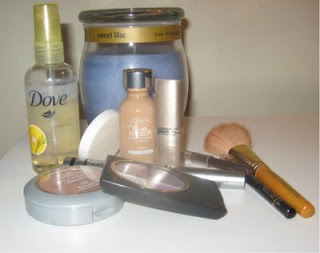 When I was in high school (continuing into my 20's) my girlfriends and I always ritualized the motions we went through in order to get ready for a date. "Putting on ones face" was a euphemism for putting on makeup---you know, foundation, eye shadow, blush and mascara---all the things required to make a silk purse out of a sow's ear. If the date was made during the week, countless hours were spent talking about what should be worn, etc. The entire group participated in this rather juvenile behavior. If the date turned out to be a jerk who stood a friend up, we were there for that, too. We waited with the member of the group who was going on the date (or not). If the guy said he would pick her up at 7:00 and it was going on 8:30, it was time to pack it in and forget about Mr. Wondeful showing up. It was still early enough to go out and have a girl's night though. We had a quaint turn of phrase for those who held out until the last possible moment. We called it "wasting makeup". Most of us back then were on an allowance (or later when we had jobs, they were of the restaurant or department store variety) and money was scarce. It seemed impractical to waste good makeup on a guy who was not going to show up.
When I got into the spanking scene, I caught myself on several occasions engaging in the same behavior I used to loathe myself for as a teenager. Most of the men who play with me have to travel fairly long distances to get together with me and sometimes, for whatever reason, we don't connect as we'd planned. I have only been stood up on two occasions in almost six years of doing this and it's a record I'm proud of. Both times, I sat and waited either by the phone or in a restaurant until it was obvious nothing was going to happen that day. And I always found it a bit sad that good makeup had to be wasted that way.
This week, I had two play dates planned. One for Wednesday and one for Thursday. Both of my dates cancelled due to the horrible weather we were having. Wednesday was particularly disappointing as I felt it was a waste of not only good makeup, but a nice job of applying it as well. I had outdone myself in that department. However, there was always the next day and I sort of foolishly felt optimistic. I made plans with the Thursday date about a week before and we had a couple of very enthusiastic chats about all the fun things we were going to do. Imagine my surprise when I don't hear a peep from him. Cigi and I had something that popped up that morning that had to be taken care of. I had neglected to get his phone number from him but he had mine. I thought as it got to be late and I still wasn't at the restaurant where we'd planned to meet, he would call and ask what was up. But he never called. I didn't hear from him at all that day. Again, I was disappointed because you know, makeup doesn't grow on trees.
Yesterday, he left me an offline message apologizing because a storm had left him without power and he'd had to purchase a generator (not a cheap buy, I can assure you). We made plans to meet after the Holidays. Hopefully, no makeup will get wasted then.
So ladies, I guess the lesson to be learned from this is that just because your date stood you up is no reason to let perfectly good makeup go to waste. Call some friends and have dinner and a movie. Lift each other's spirits when it happens because it can be a tremendous blow to the ego, especially if you never hear from the guy again. If you're lucky, while you're out tending to your wounded pride, you just might meet someone who will make that makeup job worth the trouble.
Posted by Cheryl at 7:44 PM